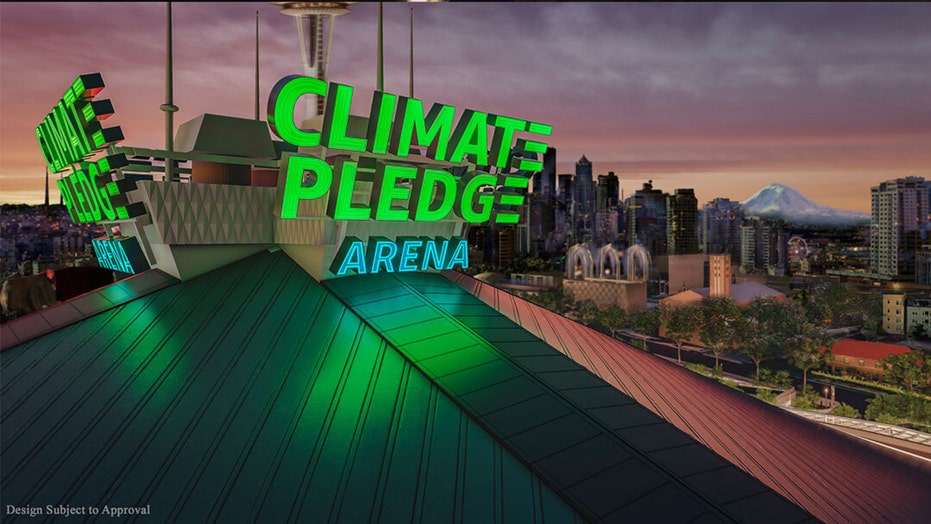 There will be a new arena under construction in Seattle.

Climate Pledge Arena will be the first zero-carbon arena in the world thanks to the partnership of Oak View Group (OVG), NHL Seattle and Amazon, an announcement Thursday revealed.

The arena -- which will be home to NHL Seattle -- will be powered by renewable energy rather than the use of natural gas in arenas and stadiums.

“I’m excited to announce that Amazon has bought the naming rights to the historic Seattle arena previously known as KeyArena,” Bezos wrote. “Instead of calling it Amazon Arena, we’re naming it Climate Pledge Arena as a regular reminder of the urgent need for climate action. It will be the first net zero carbon certified arena in the world, generate zero waste from operations and events, and use reclaimed rainwater in the ice system to create the greenest ice in the NHL. #ClimatePledge.”

"Our goal is to make sure every visit to this arena will be enjoyable and memorable, and sustainability is a large part of that," said Tim Leiweke, CEO of Oak View Group and leader of the arena project. "It is not just about one arena, it's the platform. We challenge music, facilities, concert tours, and sports. It is our time to step up to face the challenge of our generation. We must take steps to build arenas and stadiums that front-and-center align with our zero-carbon mission statement."

Climate Pledge Arena will also be the first arena to ban single-use plastics and commit to functional zero waste. Fans will see only compost and recycling bins, no trash cans, according to the partnership. It will be the lowest embodied carbon arena in the world.

The ice will be the greenest in the world. The arena will use rainwater, refrigerants with zero greenhouse gas emissions and electric Zambonis. It’s also the largest coordinated effort of fan engagement with climate issues of any NHL team.

"Having worked on some of the greenest projects in the world, this project stands above everything in its ability to reach a broader audience and address climate change and other global environmental issues," said Jason F. McLennan, a noted Seattle-area architect and founder of the Living Building Challenge, which is consulting with OVG and NHL Seattle on the arena project.

"I knew the world would force more and more sports and entertainment venues to eliminate all carbon emissions. It was just a matter of when and where. I am delighted it is now and here in Seattle."