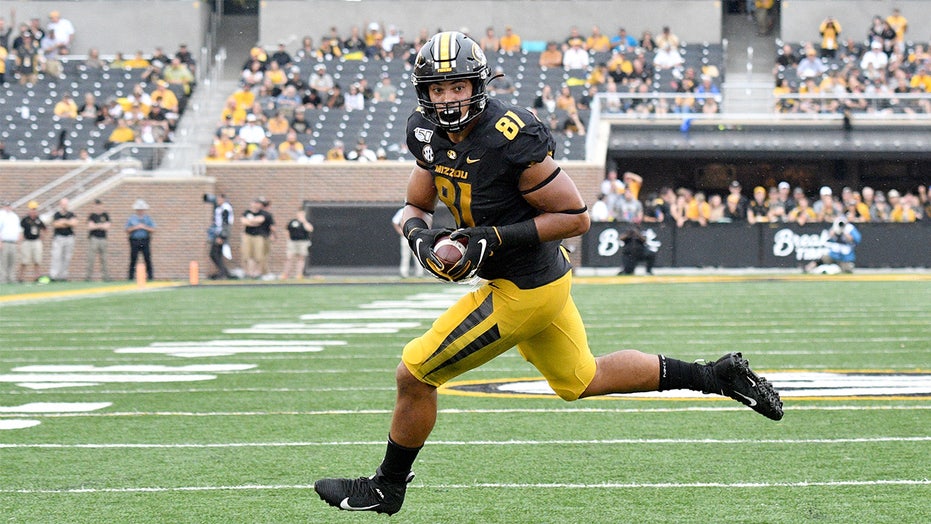 Albert Okwuegbunam is a tight end who is looking to make the jump from college to the pros.

Here are five other things to know about Okwuegbunam.

Okwuegbunam was well on his way to being one of the best tight ends in college football during his junior campaign in 2019.

He suffered an injury against Florida in the ninth game, and never saw the field again for the remainder of the season. Okwuegbunam was named a finalist for the John Mackey Award, which is given annually to the nation's top player at the position. He finished the year with 43 catches for 466 yards, both of which were career-highs, and six touchdowns in his nine games.

Okwuegbunam had a monster game in Missouri’s homecoming win over Memphis on Oct. 20.

He had a career-best performance when he caught six passes for 159 yards and three touchdowns. The multi-score game was the fifth of his career, which tied him with former All-American Chase Coffman for the most multi-touchdown games by a Missouri tight end.

Outside of football, Okwuegbunam enjoys fishing and playing other sports as well, according to Missouri’s football page. Wondering about his last name? The origin of it is Nigerian. His father, also named Albert Okwuegbunam, moved to the United States from Nigeria when he was 19 years old.

According to Fantasy Pros, Okwuegbunam is the ultimate boom or bust tight end in the 2020 NFL Draft.

Okwuegbunam is likely to fall into the third round, according to the site. He did improve his stock at the NFL Combine by running a 4.49 40-yard dash, and there should be plenty of teams interested in him as a No. 2 option. He has the potential to develop into a high-upside starter.