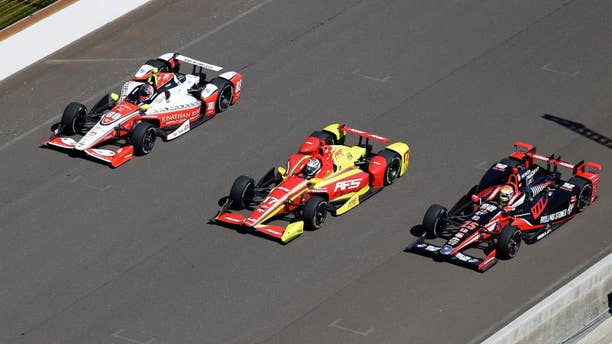 Ryan Hunter-Reay responds to a question during a news conference before the Indianapolis 500 auto race at Indianapolis Motor Speedway in Indianapolis, Thursday, May 21, 2015. (AP Photo/Darron Cummings) (The Associated Press)

When Ryan Hunter-Reay stood in Victory Lane after a thrilling last-lap duel with Helio Castroneves, he had a hard time describing just what winning the Indianapolis 500 meant to him.

"I'm a proud American boy," Hunter-Reay said with a smile, "that's for sure."

It was supposed to be a transformational victory a year ago, the return of Americans to the top tier of open-wheel racing. Sure, Hunter-Reay had won an IndyCar title for Andretti Autosport in 2012, but none had won the "Greatest Spectacle in Racing" since Sam Hornish Jr. in 2006.

Hunter-Reay made the usual media rounds afterward. He was lauded on TV and radio, newspapers and magazines. Photos of the traditional milk dripping off his chin popped up everywhere.

Then a curious thing happened: Nothing.

The victory never seemed to resonate. It never seemed to capture the public's imagination the way a victory by an Andretti or Rahal would give the ailing sport a boost. Hunter-Reay won again at Iowa, his third triumph of the year, and wound up finishing sixth in the series standings, but his name largely remained foreign to all but the most ardent racing fans.

"Ryan Hunter-Reay, to me, is one of the best drivers out here, you know? But unfortunately, it hasn't really moved the needle," said Graham Rahal, the son of 1986 Indianapolis 500 winner Bobby Rahal. "And to me, that's a problem."

Rahal has nothing against Hunter-Reay. In fact, the low-key Texan is considered one of the "good guys" in the sport, not only for what he does on the track but away from it. Ever since his mother died of cancer in 2009, he has spent much of his free time working with organizations that raise money and awareness for the global fight against the disease.

He's affable, well-spoken and successful. He drives for one of IndyCar's premier teams and is the kind of driver who should have rock-star appeal.

Yet as he prepares to defend his title on Sunday, he is the forgotten man. He hasn't had much speed this month, starting with a disappointing performance in the road race at Indianapolis Motor Speedway. He qualified just 16th for the Indy 500, then struggled in Friday's final practice.

He did 36 laps on carb day and his best was 223.972 mph, better only than Pippa Mann and Bryan Clauson among the 33 drivers that got in laps in the hour that the track was open.

"Everyone was shaking out some stuff they haven't tried," he said after his poor qualifying effort, "but I'm just worried about the race. We wanted to stay inside the top 20. We started 19th last year and that turned out OK."

Did it ever. After spending the early portion of the day working his way to the front, Hunter-Reay was dueling Castroneves, who was chasing his record-tying fourth victory.

With a daredevil move, Hunter-Reay passed the Penske Racing driver as they crossed the Yard of bricks, wheel-to-wheel under the white flag. Castroneves tried to overtake him coming out of Turn 4, but Hunter-Reay beat him in a drag race down the front stretch by 0.060 seconds.

Only the 1992 race had a closer finish when Al Unser Jr. beat Scott Goodyear by 0.043 seconds.

"Ryan's been a huge part of our team. He deserved it," said team owner Michael Andretti, adding that Hunter-Reay would have been his second choice to win behind only his own son, Marco.

Hunter-Reay has struggled to find speed much of this season, his best finish and only top-5 a fifth at Alabama. But he also proved last year that he knows his way around the famed oval on the western edge of Indianapolis, along with the way to Victory Lane.

Even if many people have forgotten it.