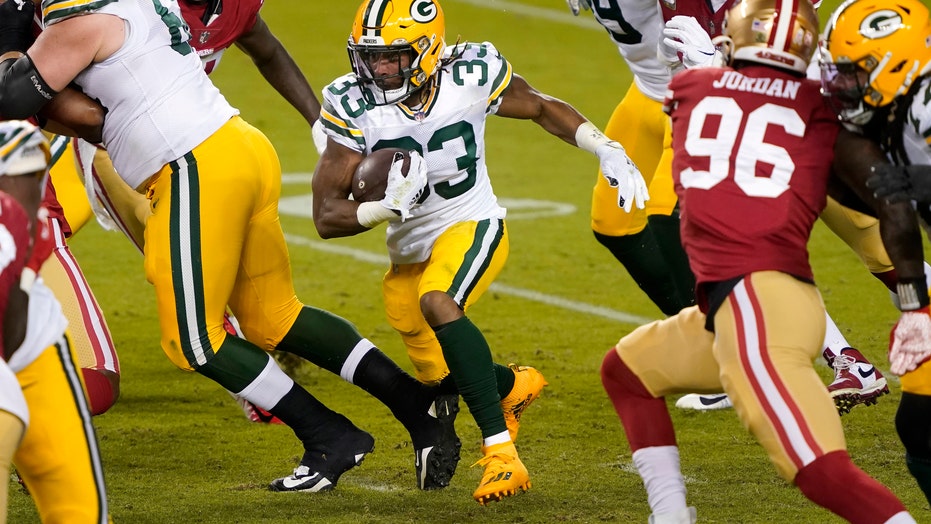 Green Bay Packers running back Aaron Jones was forced to miss games against the Houston Texans and Minnesota Vikings with a calf injury before returning Week 9 against the San Francisco 49ers.

Jones took it in a positive manner saying it was “beneficial” for the team to keep him out until he was ready to return to the field at 100%.

JAGUARS’ JAKE LUTON GUSHES OVER PLAYING AGAINST AARON RODGERS: 'HE'S A WIZARD WITH THE FOOTBALL'

“I definitely do think it was beneficial,” Jones told reporters via the Milwaukee Journal Sentinel. “If it was up to me, any athlete, we’re competitors and we want to get out there and compete with our brothers, but that’s why you have team doctors and training staff.

PACKERS' AARON RODGERS TAKES AIM AT NFL OVER COVID-19 PROTOCOLS: 'ARE WE DOING ALL THIS BASED ON SCIENCE?'

"So they make sure you’re not putting yourself at risk, and that you’re there to play all the games in the season and there to help your team in the long run.”

In the Packers’ 34-17 win over the 49ers, Jones had 15 carries for 58 rushing yards and five receptions for 21 receiving yards.

So far this season, Jones has 447 yards with five scores, and he will once again lead the Packers’ backfield against the Jacksonville Jaguars in Week 10.