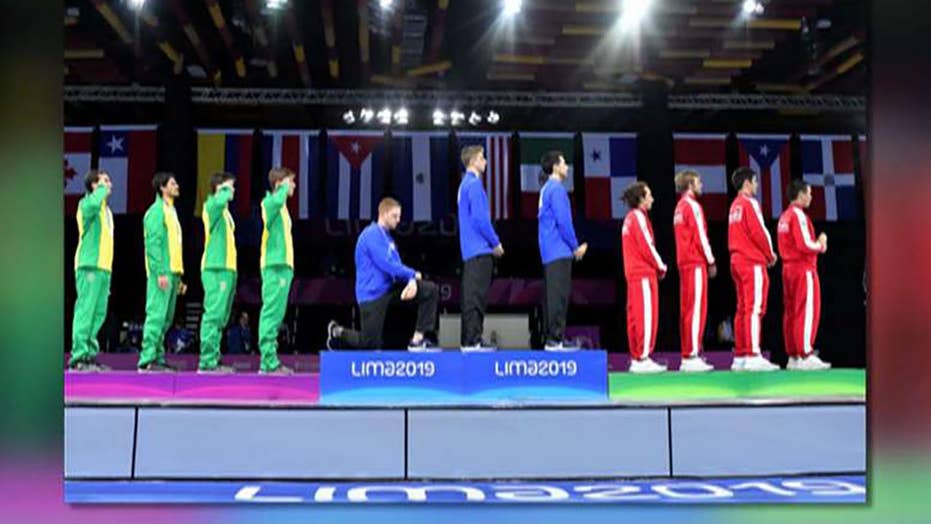 Two U.S. athletes were given a year of probation by the U.S. Olympic and Paralympic Committee (USOPC) for staging protests while on the podium at the Pan American Games earlier this month, letters sent Tuesday revealed.

Hammer thrower Gwen Berry raised her fist and fencer Race Imboden took a knee while on the medal stand last week in Lima, Peru. All athletes at the Pan American Games and the Olympics agree to rules forbidding political protest.

"It is also important for me to point out that, going forward, issuing a reprimand to other athletes in a similar instance is insufficient," USOPC CEO Sarah Hirshland wrote in the letters, which were obtained by the Associated Press.

In this Friday, Aug. 9, 2019 photo, released by Lima 2019 News Services, Race Imboden of the United States takes a knee, as teammates Mick Itkin and Gerek Meinhardt stand on the podium after winning the gold medal in team's foil, at the Pan American Games in Lima, Peru. (Jose Sotomayor/Lima 2019 News Services via AP)

US FENCER TAKES KNEE AT PAN AM GAMES IN PROTEST

"We recognize that we must more clearly define for Team USA athletes what a breach of these rules will mean in the future," Hirshland wrote. "Working with the (athletes and national governing body councils), we are committed to more explicitly defining what the consequences will be for members of Team USA who protest at future Games."

After his protest, Imboden tweeted “Racism, gun control, mistreatment of immigrants, and a president who spreads hate are at the top of a long list" of issues that need to be addressed.

Berry said she was protesting social injustice in the United States. It was "too important to not say something,” she said.

Both athletes are eligible for the Olympics next year in Tokyo.