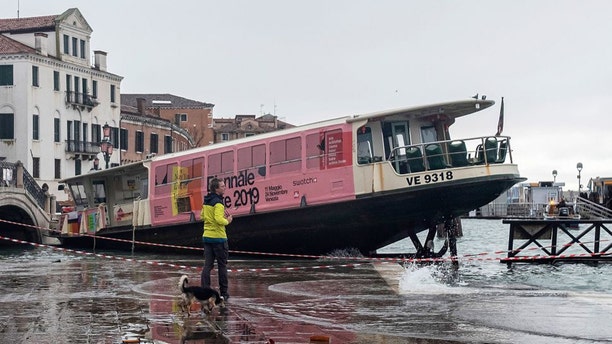 Venice is in a state of emergency as the Italian city deals with the aftermath of one of the worst floods in its history.

Late on Tuesday (Nov. 12), high tides from the surrounding lagoon surged onto the more than 100 islands that make up Venice, flooding 85% of the city and damaging artwork and many historic sites, Mayor Luigi Brugnaro tweeted. Photos and videos posted on social media show the intense flood turning alleyways into rushing rivers, stranding large water taxis in public plazas, and drenching some of the city's most iconic historic sites — including St. Mark's Basilica, completed in 1092.

According to the local tide monitoring center, water levels from the flood peaked at 6.1 feet (1.87 meters) last night — the highest floodwaters in more than 50 years, and the second highest ever recorded in Venice. (The tide reached 6.3 feet, or 1.94 m, in November 1966.)

Venice is susceptible to some flooding — or "aqua alta," as it's regionally known — every year when high tides mix with heavy rain and strong winds. However, Brugnaro noted, yesterday's intense surge was exceptional, and almost certainly linked to the increasingly powerful storms fueled by global warming.

"These are the effects of climate change," Brugnaro tweeted. "The costs will be high."

Of the 10 highest tides in Venice since record-keeping began in 1923, five have occurred in the last 20 years, including the current flood and one in 2018, BBC meteorologist Nikki Berry reported. Both events were tied to strong storm surges blowing northeastward across the Adriatic Sea (Venice is located on the northern seashore), thanks in part to changing patterns in the jet stream. These jet-stream patterns are likely to continue, leading to more frequent and intense storms, as climate change escalates, Berry wrote.

That puts Venice — which is already sinking at a rate of a few millimeters per year — at risk of more annual damage like this. To mitigate this damage, the Italian government has been developing a series of barriers and floodgates known as the Mose Project since the 1980s. The project, which was first tested in 2013, has cost billions of euros and may finally be ready for implementation in 2021, the BBC reported.

Two people have been reported dead from flood-related accidents since Tuesday. A man living on Pellestrina, one of the many islands that make up the Venetian lagoon, died of electrocution while attempting to start a water pump in his home. Another man was reported dead in his home in an unrelated incident.

St. Mark's Basilica, the iconic cathedral sitting in Venice's central piazza, was flooded for the sixth time in 1,200 years (four of those floods occurred in the past 20 years, The Guardian reported). According to Brugnaro, the landmark suffered "grave damage" to its structural columns and the crypt was completely flooded. Water damage appears rampant through the city's many shops, hotels and landmarks.