Avalanche safety: What are the warning signs

As fresh snowfall beckons those looking to enjoy the great outdoors in winter, it also brings the risk that comes along with avalanches. Feel safer while hitting the slopes while keeping an eye out for these signs that an avalanche could occur.

The U.S. is on track to surpass its all-time record for avalanche deaths this season after extreme winter weather conditions heightened avalanche danger.

From the end of January to Feb. 6, 2021, 15 backcountry skiers, snowboarders and others were killed by avalanches, marking the most deaths in a week since 1910.

Thirty-three people have been killed by avalanches since Oct. 1, 2020, according to the Colorado Avalanche Information Center (CAIC).

This worrying trajectory comes after months of heavy snow, ice and extremely cold temperatures, threatening communities from California and Texas to Illinois and New Hampshire.

As city streets were shuttered, also buried under snow and ice, Americans increasingly turned to outdoor backcountry sports and activities amidst the COVID-19 pandemic.

FILE - In this Feb. 25, 2013 file photo, a skier takes advantage of the snowy conditions at Silver Mountain in Kellogg, Idaho. The Shoshone County Sheriff's Office said Tuesday, Jan. 7, 2020, it received reports of up to three separate avalanches on the mountain and that emergency responders were coordinating rescue efforts. (Kathy Plonka/The Spokesman-Review via AP)

But, as interest grew, so did risk.

And, although experts were on high alert, human error triggers nine out of 10 avalanches  -- especially as the number of skiers and snowboarders surge.

CAIC director Ethan Greene told The Associated Press in December that Colorado's snowpack was the weakest it had been since 2012.

The early-season snow in addition to a dry period in the West -- with fires in California lasting through the end of the year -- created a weak layer in the snowpack before even more snowfall was added on top.

While more people usually die in avalanches in Colorado than in any other state, mountain snow is particularly tricky.

A person can suffer brain damage in four to six minutes when buried in an avalanche their airway blocked and 75% die from asphyxiation, The Los Angeles Times reported Monday.

However, winter is not over yet and even as avalanche season -- between December and April -- draws to a close, avalanches can occur during any month of the year.

In the next few days, fire weather threats, rain and snow will impact the country.

The National Weather Service reported on Tuesday that a front from the Northern Plains to the Great Basin is expected to move east to the Great Lakes to the Southern High Plains by Thursday, producing snow over Colorado's Rockies. 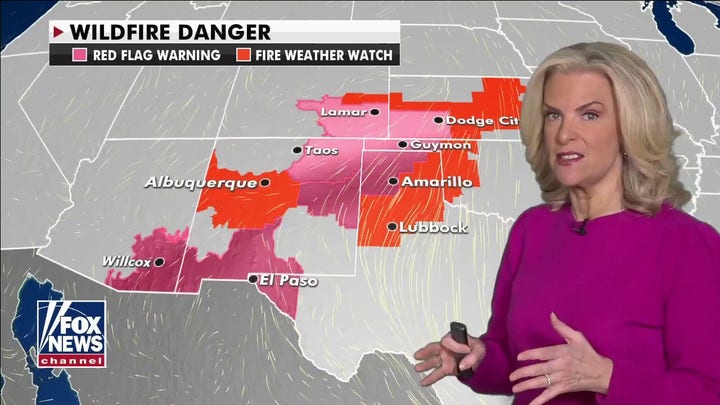 Thunderstorms are possible over the Plains and Mississippi Valley on Wednesday, which will change to snow as cold air moves southward. Snow will continue in the Midwest on Thursday.

On the West Coast, snow will fall at a high elevation and spread inland by Tuesday night, moving through the Rockies and Plains.

On Wednesday, more snow will fall over the mountains and additional snow and rain will move into the Southwest by late Wednesday.

One to 2 feet are forecast over the Sierra Nevada into Northern California's coastal mountains.