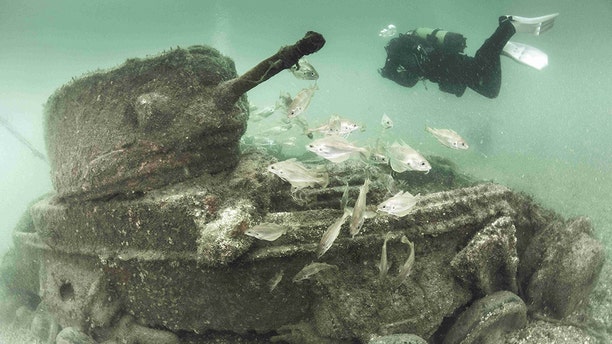 POOLE BAY, DORSET Doomed tanks which “altered the course of history” by preventing a disastrous blunder on D-Day have been revealed in stunning new images (Credit: Pen News/Paul Pettitt)

Doomed tanks that were the key to winning D-Day have been revealed in stunning new underwater images.

The war tanks sunk during Operation Smash - a huge training exercise held on a Dorset beach in April 1944, just weeks ahead of the Normandy landings.

Six lives were lost during the drill - but a lesson was learned so that, on D-Day, British and Canadian tanks were launched in shallow water.

Nick Reed from The Isle of Purbeck Sub Aqua Club, which has launched a project to map the history of the seven sunken tanks, said the six soldiers lost did not die in vain.

"Everybody says that Operation Smash was an absolute, complete disaster," said Nick.

"Well, 32 tanks were launched and seven sank, so that means 25 got to shore in this exercise and from that the British learned a lesson.

"So when the British and Canadians launched their tanks on D-Day, they didn't launch theirs offshore because it was too rough.

"Whereas the Americans launched theirs five kilometers offshore."

The result of the American decision is well-known - just two of the 29 tanks initially deployed to storm Omaha beach made it ashore.

Omaha would be the bloodiest of the D-Day beaches. 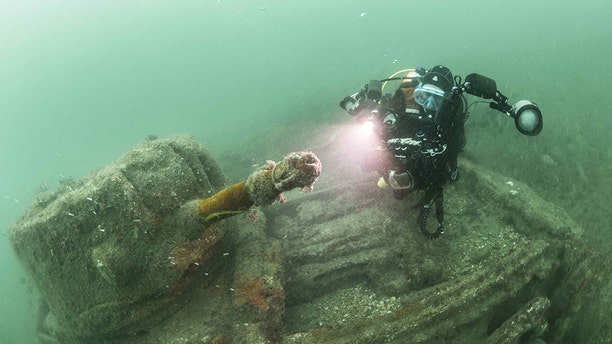 POOLE BAY, DORSET Doomed tanks which “altered the course of history” by preventing a disastrous blunder on D-Day have been revealed in stunning new images (Credit: Pen News/Paul Pettitt)

"If we hadn't got armored support ashore on D-Day, our troops may not have established a beach head," said Mr Reed.

"So in many ways the sacrifice of those six guys may have changed the course of World War Two - that's the way we like to think of it.

"Their sacrifice wasn't in vain, things were learned from it and maybe that contributed to the success of D-Day."

Conditions at the dive site off Studland Beach are notoriously changeable, making the sunken tanks a challenge to photograph.

The new images of them are thought to be the clearest ever taken.

Paul Pettitt, who photographed the wrecks with his wife Alison, said: "It's rough as you like.

"Those pictures were done over the course of a whole summer. Some days we went down and weren't able to get anything.

"The worst problem is the wind direction which kicks up the silt and sand on the bottom, and makes it go very gloomy down there.

"But we got a lucky break one day when we got some really clear visibility and were able to get these pictures."

The tanks have also taken on new lives as artificial reefs.

"There are several big conger eels living in one of the main tanks, there's crabs, there's lobsters, there's big shoals of fish that swim around them.

"That's almost like a commemoration of the men themselves - men died on these tanks but these tanks now are providing life to the marine animals around the area."

The Duplex Drive Valentine tanks were equipped with a buoyant canvas screen which could be raised up around the tank and sat above the water line.

But soon after the tanks were launched the wind changed and water started to sweep over the top of the screens.

"The skirts, which provided the buoyancy, were only about a meter above the water - and obviously what keeps water out will keep water in.

"So I think most of them were swamped and sank."

Earlier this year, a man believed to be the last-surviving soldier from Operation Smash - who is also a crew member from one of the doomed tanks - was located.

Albert Price, 94, is now living in the West Midlands.

It's hoped he'll be able to attend a 75 year commemoration of Operation Smash next year.