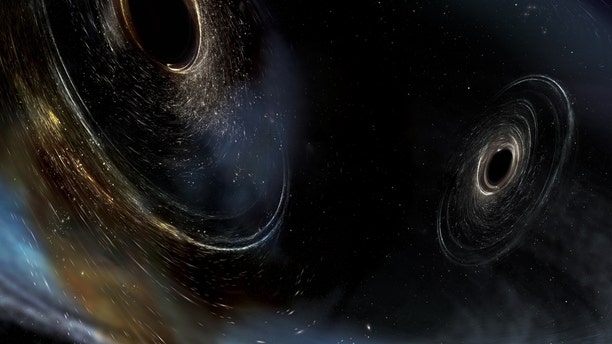 An artist's simulation of two black holes merging in space. The gravity of a black hole is strong enough to warp space, creating the swirling effect around both objects. (LIGO/Caltech/MIT/Sonoma State (Aurore Simonnet))

Scientists on the hunt for colliding black holes should turn their eyes to the quiet, outer regions of galaxies like the Milky Way, a new study suggests.

In late 2015, researchers made the first-ever direct detection of gravitational waves — ripples in the universal fabric known as space-time. Astronomers have now detected four separate gravitational-wave signals coming from pairs of black holes colliding and merging together. The fusion of black holes this size — about 20 to 50 times the mass of the sun — had never been directly observed in nature before.

Unfortunately, gravitational-wave detectors have a tough time narrowing down where those merging black holes are located. This makes it difficult for scientists to do follow-up studies, or to look for possible sources of light around the black holes. [No Escape: Dive Into a Black Hole (Infographic)]

Previous work had suggested that pairs of black holes in this mass range are more likely to form in dim dwarf galaxies. But the new study shows that the quiet outer regions of larger, spiral-shaped galaxies — like our own Milky Way — may be better places to look.

"If our calculation is correct, the advantage is that if you're trying to localize the signal, it's a lot easier to find big galaxies, right? That's pretty obvious," said study lead author Sukanya Chakrabarti, a professor of physics and astronomy at the Rochester Institute of Technology (RIT).

Determining the precise location or home galaxy of these black hole pairs has multiple advantages for astrophysics. First, it would increase the odds of seeing light signals created by the merger of two black holes. While the black holes themselves are completely dark, nearby matter (such as a disk of gas and dust swirling around it) could radiate light. Studying this light could provide scientists with more information about these events.

Additionally, scientists want to use gravitational waves to make a measurement of the expansion rate of the universe — a value known as the Hubble Constant, named after the astronomer Edwin Hubble. Right now, there are two ways to measure this value, but they have produced slightly different values, and scientists don't know why. Measurements from gravitational waves might solve the discrepancy.

Black holes can form when massive stars run out fuel and explode as supernovas. Much of the material that made up the living star collapses down onto a single point, and a black hole forms. Black holes with 10 to 50 times the mass of the sun must form from stars with masses between about 40 and 100 solar masses, according to scientists with the Laser Interferometry Gravitational-Wave Observatory (LIGO) project, which spotted space-time ripples from the four black hole mergers (as well as those generated by a different kind of event — the collision of two neutron stars).

So where are these massive stars born?

To make a truly massive star requires a very simple starting mixture consisting almost exclusively of hydrogen and helium. "Heavier" elements (those with numbers higher than 2 on the periodic table) can dampen the formation of very massive stars. This happens because those elements give off more intense radiation compared to hydrogen; that radiation exerts an outward force that pushes gas and other material away, so the star doesn't accumulate more matter and grow bigger.

The bright regions of large galaxies — like the beautiful, swirling arms of the Milky Way — are low on the list of possibilities, because they are so rich in heavy elements.

But nearly all spiral galaxies possess an outer disk consisting mainly of hydrogen, Chakrabarti said. These co-called "H1 regions" have very low overall star-formation rates, and are thus fairly dim compared to the bright central disks. In the case of the Milky Way, the H1 region is about as thick as the main disk is wide — about 30 kiloparsecs, or about 100,000 light-years across. In some galaxies examined in the paper, the H1 disk is 80 kiloparsecs across, Chakrabarti told Space.com — plenty of room for massive stars to be born.

The new paper calculates the rate at which these heavy black hole collisions are likely to occur in these H1 regions. They find that the number of collisions in a given area, over a given time, is comparable, if not better than, for dwarf galaxies.

Dwarf galaxies are small collections of stars that look more like sparkly clouds than bright disks of light. A pervious paper showed that dwarf galaxies are more likely to host these black hole pairs than large spiral galaxies like the Milky Way. But that paper did not consider distinct regions in those galaxies, like the H1 region, Chakrabarti told Space.com.

The previous study was co-authored by Richard O'Shaughnessy, an assistant professor of mathematics at RIT and a member of the LIGO collaboration — and one of Chakrabarti's co-authors on the new paper. Chakrabarti said she talked with O'Shaughnessy after the publication of the earlier paper, telling him he should consider regions of galaxies, and not just galaxies as a whole.

"This is a new field," said Chakrabarti, referring to the direct detection of these black hole mergers. "Our paper is really the third to have looked at this question of what are the host galaxies of binary black holes. It's sort of a new question, and it does require the confluence of two fields that have been somewhat distinct."

The authors state in the paper that their numerical estimations for black hole collisions in these different environments aren't very precise, because there is still very little data to work with — only four detections of gravitational-wave signals from black holes so far. But, Chakrabarti said the overall conclusion is that, when it comes to black holes in this mass range, the H1 regions of these galaxies are just as fertile as dwarf galaxies, or even more so.

The paper is now available on the open-source website arxiv.org, and has been accepted for publication in the Astrophysical Journal.