'Storm Area 51' has alien 'believers' mostly standing near a gate, looking 'to the skies,' feeling the spirit 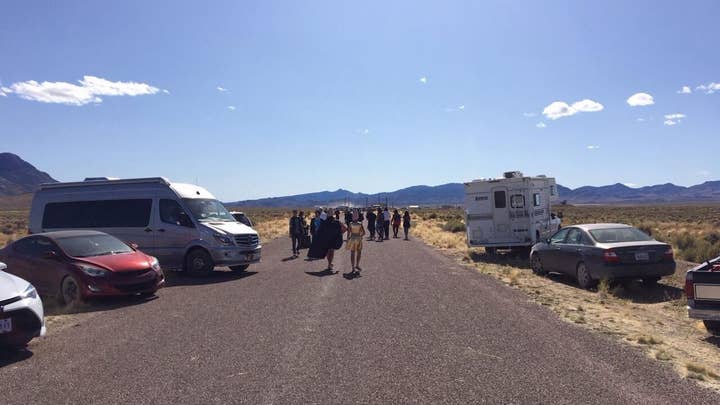 On the lonely dirt road to one of the entrances to the enigmatic Area 51, the only thing that resembled "storming" on Friday was all the dust kicked up from all the vehicles making the trek for selfies and group photos.

After months of hype -- and emergency preparations that saw hundreds of law enforcement and fire officials scatter across the vast high-desert area around Rachel, Nev., about 140 miles north of Las Vegas -- hardcore alien "believers" and those open to having their minds changed on the existence of extra-terrestrials gathered outside the military base, and were mostly just happy to be there.

"I've always looked to the skies, but I always kept it to myself because you didn't talk about those things and now everyone is talking about things because it's easier to come out in the open with being a believer," Lisa Miller, who came all the way from Kentucky, told Fox News.

"I've always looked to the skies, but I always kept it to myself because you didn't talk about those things and now everyone is talking about things because it's easier to come out in the open with being a believer."

— Lisa Miller, Kentuckian who traveled to Area 51 in Nevada

Miller, who's currently on a "sample platter of a vacation" across various stops in the Southwest, said she ventured out in the early-morning hours Friday when the actual "storming" took place. She described the scene as maybe 50 people walking, but "nobody being stupid."

"I keep telling people, everybody's looking at the gate. Look to the skies because you don't know what you're going to see out here in the desert," Miller told Fox News. "Stop looking just at the gate and broaden your mind."

On the road to the gate, there were dozens of vehicles traveling in either direction, kicking up large plumes of dust along the way.

Crowds gathering outside the back gate to Area 51 in Rachel, Nev. (Travis Fedschun/Fox News)

After parking their cars near a "road closed" sign, about 20 people walked down to the gate that serves as an entrance to Area 51. When they finally arrived, they were greeted by about eight police vehicles, with officers milling around.

One officer told Fox News that people had been coming and going throughout the day, but their numbers were never overwhelming. Most groups stuck around for up to 10 minutes, taking selfies and other photos by the gate before heading back to continue their treks through the desert to the sights along the "Extraterrestrial Highway."

The scene Friday afternoon outside the back gate to Area 51 in Rachel, Nev. (Travis Fedschun/Fox News)

For Daisy Blue and Benton Huang from Tennessee, the trip to the gate took thousands of miles. While they weren't greeted by a massive crowd, Benton said it was fun to come up and see officers outside on guard and interact with them.

"It lived up to my expectations," Huang told Fox News.

'STORM AREA 51': HAVE YOU INTEREST IN SEEING THE MYSTERIOUS SITE'S ENTRANCE? TAKE A PEEK

Area 51 tested aircraft ranging from the U-2 in the 1950s to the B-2 stealth bomber in the 1980s. The government spent decades refusing to acknowledge the site even existed, before releasing documents confirming it in 2013.The continued secrecy surrounding the site has fueled rumors of government studies of extraterrestrials and crashed UFOs.

In that spirit, and with tongue planted in cheek, the "Storm Area 51" Facebook event went viral in July as people pledged to overrun the base in an attempt to "see them aliens."

After all the hype and emergency preparations, officials said that only two arrests were made so far during the alien-themed events in Rachel and Hiko.

Lincoln County Sheriff Kerry Lee told FOX5 of Las Vegas that the arrests were made overnight, between late Thursday and early Friday. A Canadian citizen was arrested in Hiko for indecent exposure but was later released. A second, alcohol-related arrest was made and the suspect was transferred to a booking facility in Pioche.

Onlookers take photos of the outside of the back gate to Area 51 as onlookers look on. (Travis Fedschun/Fox News)

The sheriff in neighboring Nye County reported that about 40 people gathered overnight at a conspicuously green "Area 51 Alien Center" in Amargosa Valley about 3 a.m. and approached a base gate before leaving after "heated warnings" from officers.

The gathering at the gate, which could have been a scene of conflict, was instead something that was "awesome" for Alex Bauer, Danny Meyer, and Jack Homan of Chicago.

Jack Homan, Danny Meyer, and Alex Bauer from Chicago said it was "awesome" to be there. (Travis Fedschun/Fox News)

"It passed my expectations," Meyer told Fox News. "It's a little anticlimactic, but I'm from the Midwest so it's kind of beautiful just looking around at all the scenery."