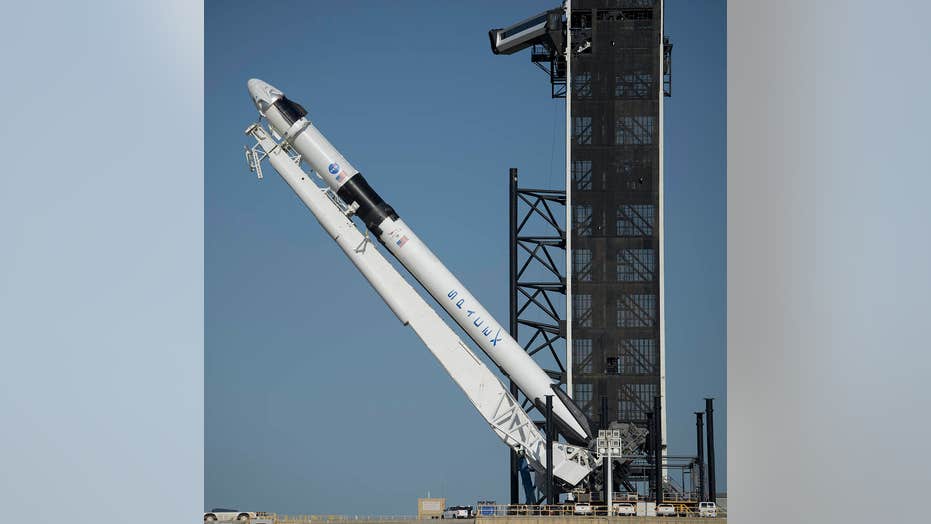 SpaceX’s Falcon 9 rocket and Crew Dragon spacecraft are being prepared for the historic Demo-2 mission that will launch NASA astronauts into space from U.S. soil for the first time since 2011.

A photo released by NASA on Thursday showed the Falcon 9 rocket and Crew Dragon being raised into a vertical position on Kennedy Space Center’s launch pad 39A, which was also used for the Apollo and space shuttle programs. NASA astronauts Doug Hurley and Bob Behnken are scheduled to launch at 4:33 p.m. EDT on May 27.

It will be the first time a private company, rather than a national government, sends astronauts into orbit.

“A new era of human spaceflight is set to begin,” said NASA in a statement accompanying the photo.

The SpaceX Falcon 9 rocket with the company's Crew Dragon spacecraft onboard is seen as it is raised into a vertical position on the launch pad at Launch Complex 39A. (NASA/Bill Ingalls)

SpaceX also tweeted a time-lapse video of the preparations Thursday.

Launched atop the Falcon 9 rocket, Crew Dragon will accelerate to approximately 17,000 mph, according to NASA, placing the capsule on course for the International Space Station.

Hurley and Behnken flew to Kennedy Space Center on Wednesday, exactly one week before their historic SpaceX flight.

Under normal circumstances, large crowds would have been expected to witness the historic launch but, citing concerns about the coronavirus pandemic, NASA has urged people to stay away. Hundreds of thousands of people flocked to the area near Kennedy Space Center for the last shuttle launch in July 2011, according to Spaceflight Now.

Last week, NASA agreed to pay Russian space agency Roscosmos $90 million for one final seat on one of its Soyuz rockets.