Solar storms might be causing gray whales to get lost 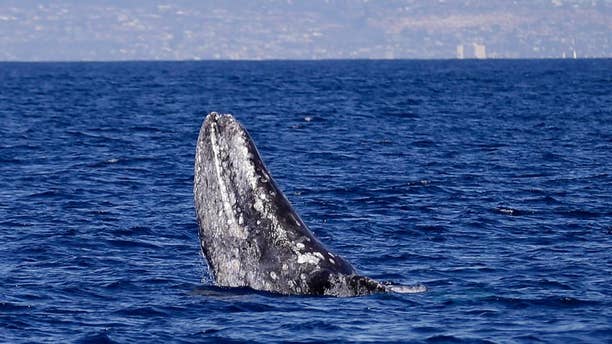 March 5, 2015: A gray whale breaches the surface during a whale-watching trip off the coast of San Diego - file photo. (The Associated Press)

AUSTIN, Texas — Migrating animals that live in Earth's oceans may have a closer relationship with the sun than we thought. New research shows that healthy gray whales are nearly five times more likely to strand when there is a high prevalence of sunspots, and therefore high levels of radio waves emitted from solar storms. The researchers presented their findings here at the Society for Integrative and Comparative Biology meeting on Jan. 7.

"It's a fascinating finding," Kenneth Lohmann, a biologist who studies magnetoreception (or how animals detect Earth's magnetic field) at the University of North Carolina at Chapel Hill, told Live Science in an email. "There have been several previous reports linking magnetic storms to whale strandings, but this is a particularly well-done and convincing analysis," said Lohmann, who was not involved in the study.

Scientists are unsure if whales use magnetoreception to navigate, but migratory whales, such as gray whales, are likely candidates because the ocean provides few other navigational cues, said study lead author Jesse Granger, a conservation biophysicist at Duke University in North Carolina.

From March to June, gray whales swim north from the coast of Baja California, Mexico, to the cool, food-rich waters of the Bering and Chukchi seas, north of Alaska. Whales make their return trip south beginning in November. Occasionally, a seemingly healthy gray whale strands while en route. Although there are myriad reasons why a whale might strand, one possibility is that the whale made a navigational error when something was disrupting Earth's magnetic field or the whale's ability to detect it — like a solar storm, for example.

Granger and her colleagues reviewed gray whale stranding data from the U.S. West Coast between 1985 and 2018 and found that live and otherwise healthy gray whales were stranding far more often when there were a high number of sunspots.

But that finding alone doesn't explain how a sunspot could possibly cause a gray whale to get lost. Although sunspots cause a large increase in electromagnetic radiation, most of that radiation doesn't make it to our planet’s surface, because that light is blocked or scattered by Earth's atmosphere.

"However, there's a huge chunk in the radio frequency (RF) wave range that does make it all the way to the Earth," Granger said. "And, it's been shown in several species that RF noise can disrupt a magnetic orientation ability."

The researchers found there was a 4.8-fold increase in the likelihood that a whale would strand on days when there was high RF noise (because of solar storms) compared with low RF noise. This suggests that the whale's magnetic receptor, or ability to read its map of the area, could be what's causing the whale to take a detour — not that the map is incorrect, Granger said.

But scientists still don't know for sure if whales even have a magnetoreceptive sense or not. All we know, Granger said, is that "whales are stranding a lot more often when the sun is doing crazy stuff."

Magnetic storms are also known to cause other issues for animals unrelated to navigation, Lohmann said. "So, more work will be needed to determine whether the storms are affecting whale navigation or having some other effect."

One of the team's next steps, Granger said, is to see if this is a phenomenon that's seen in other migratory species and in other parts of the world where the magnetic field may not be as easily detected.