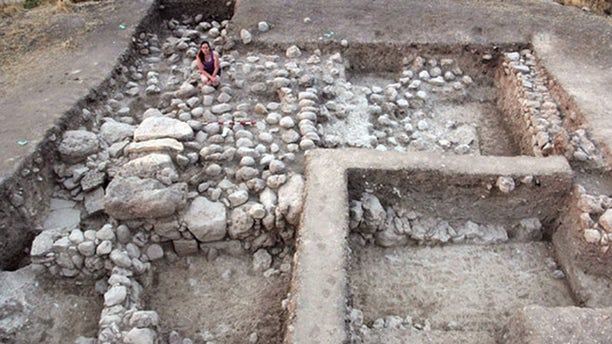 The jug with treasure was found just to the north of a "massive structure," as the researchers call it, which may be a tower overlooking a valley. (Robert Mullins/Azusa Pacific University)

A jug containing silver earrings and ingots has been discovered at the ancient biblical city of Abel Beth Maacah in Israel.

Found to the north of a massive structure that may be a tower, the jug and its treasure appear to date back to about 3,200 years ago, long before minted coins were invented, archaeologists said. Curiously, they found no sign that the treasure was hidden, and no one appears to have gone back for it, they added.

"We found it in a small jug leaning against a wall, apparently on a dirt floor," said researchers Robert Mullins, Nava Panitz-Cohen and Ruhama Bonfil in an email to Live Science. "It didn't seem to have been deliberately hidden in a niche or any other hidey-hole."

Panitz-Cohen and Mullins are co-directors of an excavation at the ancient city in Israel that found the treasure last summer, and Bonfil is the excavation surveyor and researcher. They published their initial findings recently in the journal Strata. [See Photos of Biblical City and Silver Treasure]

Why the treasure was not retrieved, and apparently not even hidden, is a mystery. "Perhaps the family needed to leave their home suddenly and hoped to return to retrieve this jug and its contents, but were unable to," the researchers said. Afterward, "this area was covered by accumulating debris and earth over the centuries, [and] no one knew that the treasure was there," they added.

The "massive structure," as the researchers called it in their journal article, may be a tower that overlooked the Huleh Valley. At some point, the structure fell out of use, and the area to the north of it was used for homes. The treasure may date to that time.

The site, now called Tell Abil el-Qameh,was first identified as Abel Beth Maacah in the 19th century based on its location and historical accounts, although little excavation has been done there until now.

Silver treasure
When the treasure was discovered, the silver was bunched together in what looked like a big ball. After conservator Mimi Lavi, of the Hebrew University of Jerusalem's Institute of Archaeology, cleaned the ancient silver, the team saw that it consisted of five hoop earrings.

The earrings could have been worn by men as well as women, the researchers noted. "We know from ancient iconography and from burials that men also wore jewelry, so it is possible that these were not just female ornaments," the researchers said.

A period of collapse
The period around 3,200 years ago was a time when many cities were destroyed and some civilizations collapsed. Ancient records indicate an enigmatic group called the "Sea People" descended on the Middle East, leading to chaos in the region, although they do not appear to have settled in the area of Abel Beth Maacah.

Archaeologists are unsure how these events affected Abel Beth Maacah or if they have any bearing on the silver treasure. [Photos: The 7 Ancient Wonders of the World]

"It seems most likely that Canaanites were 'in charge' or at least were the main inhabitants" of Abel Beth Maacah, the researchers said. If the city did suffer any destruction, it could have been abandoned for a time and perhaps repopulated by returning Canaanites or by Israelite tribes. "Hopefully, next season, we will be closer to some answers," the researchers said of their forthcoming dig at the site.

Biblical city
The city was used for a long period of time after the silver treasure was abandoned and is mentioned several times in the Hebrew Bible.

According to scripture, a Benjaminite named Sheba ben Bichri, who was rebelling against King David, took refuge in the city. A man named Joab pursued him there and laid siege. A "wise woman," as the text calls her, protested this action, saying Abel Beth Maacah is part of Israel.

"We are the peaceful and faithful in Israel. You are trying to destroy a city that is a mother in Israel. Why do you want to swallow up the Lord's inheritance?" (From 2 Samuel 20:14-22, New International Version)

The siege ended when the city's inhabitants killed the rebel and threw his head from the wall. Some scholars believe that King David would have lived about 3,000 years ago, roughly two centuries after the silver treasure was abandoned. While the biblical story doesn't shed light on why the treasure was abandoned, it illustrates the importance of the city in the time to come.

Mullins is also a professor at Azusa Pacific University, and Panitz-Cohen and Bonfil are with the Hebrew University of Jerusalem's Institute of Archaeology.