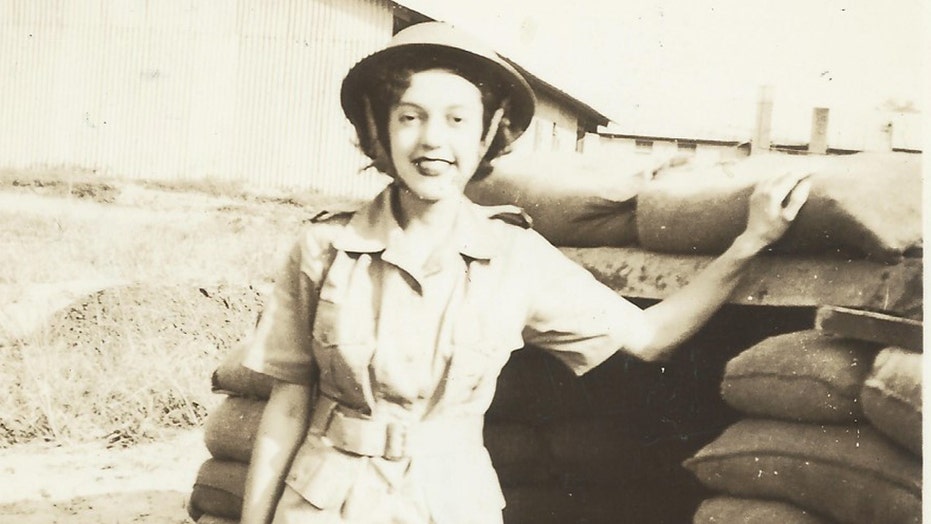 'Whatever It Took' co-authors Henry Langrehr and Jim Defelice remember the end of WWII in Europe.

The search is on for the mysterious World War II sweetheart of a Royal Air Force Spitfire pilot who was killed in the famous Great Escape.

Flt. Lt. Alastair ‘Sandy’ Gunn was shot down over Norway on March 5, 1942, during a mission to photograph the German battleship, Tirpitz. Gunn bailed out from the plane but was captured by German forces. In 1944, he was part of the famous “Great Escape” breakout from the Stalag Luft III POW camp. Recaptured shortly after the breakout, the Scot was among 50 escapees executed by the Gestapo.

Tony Hoskins, author of the book “Sandy’s Spitfire,” told Fox News that, among the letters returned by the Red Cross following Gunn’s execution, was a photo of a woman with the name “Penny” written on the back.

“It carries a camp censor's stamp indicating that this photo would have accompanied a letter, but the letter sadly was not to be found,” he told Fox News via email. “Was this a love left behind in the U.K, an admirer? A girlfriend? A fiance?”

The photo of "Penny". (Gunn Family)

While there is no mention of “Penny” in the diary that Gunn kept throughout his RAF service, Hoskins notes that the pilot did come into contact with Photo Interpreters and members of the Women’s Auxiliary Air Force (WAAF) during deployments at RAF stations at Medmenham and Benson in England and at Wick in Scotland.

“Studies of the photograph has led to a few observations in that Penny is obviously in the military and at the time of sending the photograph appears to be in either a Middle East, Far East or Mediterranean theatre of operations,” Hoskins told Fox News. “Her uniform is not standard WAAF but if [she was] a member of the RAF Intelligence Department this would not be uncommon and it is known that photo interpreters were moved around all the conflict zones in which the PRU (Photographic Reconnaissance Unit) operated.”

The photo arrived in Gunn’s last post intake in January 1944, according to Hoskins, although his subsequent letter to his parents on March 19 did not mention Penny. “Did she receive a final letter from him? Did she ever know why he never came home from the War or why she never heard from him again?” said Hoskins. “If Penny is still with us today she would be at least 97; it’s limited information to go on, but can we find Penny?”

A colorized version of a photo of Alastair Gunn relaxing in the dispersal doorway at RAF Benson in late summer 1941. (Gunn family/Colour by RJM)

Hoskins speculates that Penny may have been part of a group of 10 experienced photo interpreters posted to Algiers in February 1943. “This unit was run by the Americans under the command of Elliott Roosevelt and was called the North African Central Interpretation Unit with a mixture of English and American staff,” he added. “Those WAAFs from the NACIU were transferred to the Mediterranean Photographic Intelligence Center at San Severo near Foggia in Italy in January 1944.”

The author thinks that the photo sent to Gunn was taken in Algiers and posted before Penny was sent to Italy. This means that she would still have been stationed abroad when V.E. day occurred on May 8, 1945, and unaware of the murders committed in the aftermath of the Great Escape. “It is equally possible that having not heard from Sandy she may have met an American and moved to the USA,” Hoskins said. “Could Penny be in America?”

In 2018, Gunn’s Spitfire AA810 was recovered from a Norwegian mountainside. The plane, which had been specially equipped for long-reconnaissance, was an adapted Mk 1 Spitfire stripped of guns and armor and fitted with additional fuel tanks to extend its range from 575 miles to nearly 2,000 miles.

A team of researchers painstakingly recovered the pieces of the aircraft from a peat bog on the edge of the Arctic Circle.

The plane is now being restored by the Spitfire AA810 Project, which plans to fly it again in 2023. The group has also launched the Spitfire AA810 fitness challenge to help people keep fit during the coronavirus pandemic and raise funds for the restoration effort.

The parts of the Spitfire pictured after their repatriation to the U.K. (Spitfire AA810 project)

In a separate project, hidden footage from the secret World War II code-breaking base in southern England recently surfaced. The footage is of Whaddon Hall in Buckinghamshire, a secret site connected to the famous Bletchley Park code-breaking base.