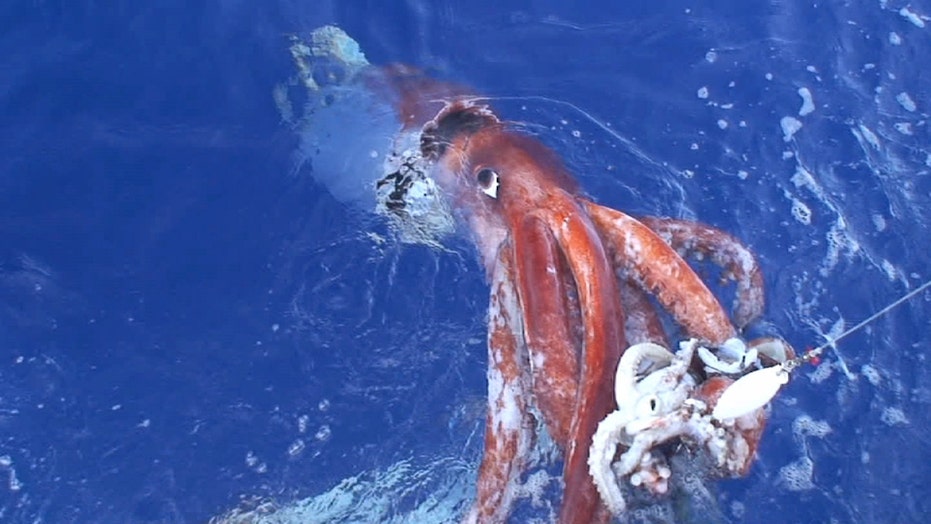 Not much is known about the mysterious giant squid, a creature that was first captured on film in 2005. Now, researchers have decoded the giant cephalopod's genome, hoping to unlock more secrets about the legendary squid.

The research, published in Giga Science, notes the giant squid has an enormous genome, with an estimated 2.7 billion DNA base pairs. By comparison, humans have 3 billion DNA base pairs. Caroline Albertin, one of the study's co-authors, found that the Hox and Wnt developmental genes seen in almost all animals are also present in the giant squid genome, meaning its massive size was not caused by whole-genome duplication.

“In terms of their genes, we found the giant squid looks a lot like other animals," Albertin said in a statement. "This means we can study these truly bizarre animals to learn more about ourselves.”

In a rare event, a live giant squid (Architeuthis dux) is hauled to the surface on a baited hook in Japan. The giant squid can be 40 feet long tip-to-tail and weigh nearly a ton. (Credit: Tsunemi Kubodera)

The researcher also discovered more than 100 genes in the protocadherin family "typically not found in abundance in invertebrates" that were seen in the giant squid genome.

“Protocadherins are thought to be important in wiring up a complicated brain correctly,” she added. “They were thought to be a vertebrate innovation, so we were really surprised when we found more than 100 of them in the octopus genome (in 2015). That seemed like a smoking gun to how you make a complicated brain. And we have found a similar expansion of protocadherins in the giant squid, as well.”

In 2015, Albertin led a team that sequenced the first genome of a cephalopod.

As such, there's still more work to be done to understand just how the giant squid became so massive, Albertin added.

“A genome is a first step for answering a lot of questions about the biology of these very weird animals,” Albertin pointed out, including features such as the largest brain among the invertebrates, their behaviors and the ability to instantly camouflage themselves.

The giant squid has long been a subject of horror lore. In this original illustration from Jules Verne’s “20,000 Leagues Under the Sea,” a giant squid grasps a helpless sailor. (Credit: Alphonse de Neuville)

Albertin also said that cephalopods are believed to have evolved independently of vertebrates, despite having a lot of complex and elaborate features. "By comparing their genomes we can ask, 'Are cephalopods and vertebrates built the same way or are they built differently?'"

“Having this giant squid genome is an important node in helping us understand what makes a cephalopod a cephalopod," she concluded. "And it also can help us understand how new and novel genes arise in evolution and development.”

The largest giant squid ever recorded was nearly 43 feet long and likely weighed almost 2,000 pounds, according to the Smithsonian.

In June 2019, NOAA spotted a giant squid in U.S. waters for the first time as part of rare footage that biologists have described as "the most amazing video you've ever seen." The giant cephalopod was spotted around 100 miles southeast of New Orleans, La.

HUMAN-SIZE BLOB DRIFTS BY DIVERS. AND IT'S PACKED WITH HUNDREDS OF THOUSANDS OF BABY SQUID.

Fairly elusive, the giant squid has been linked to myth since ancient times. The Charlotte Observer, citing data from The National Museum of Natural History, noted ancient sailors mistakenly believed giant squids were mermaids and other mythical creatures.

"For a long time, people saw mysterious movements in the water or found dead giant squid and didn't know what they were — and even confused a giant squid carcass with a merman or mermaid," the museum wrote on its website.

In August 2018, a 14-foot squid washed up on the shores of Wellington, New Zealand, prompting images of the colossal cephalopod to go viral.