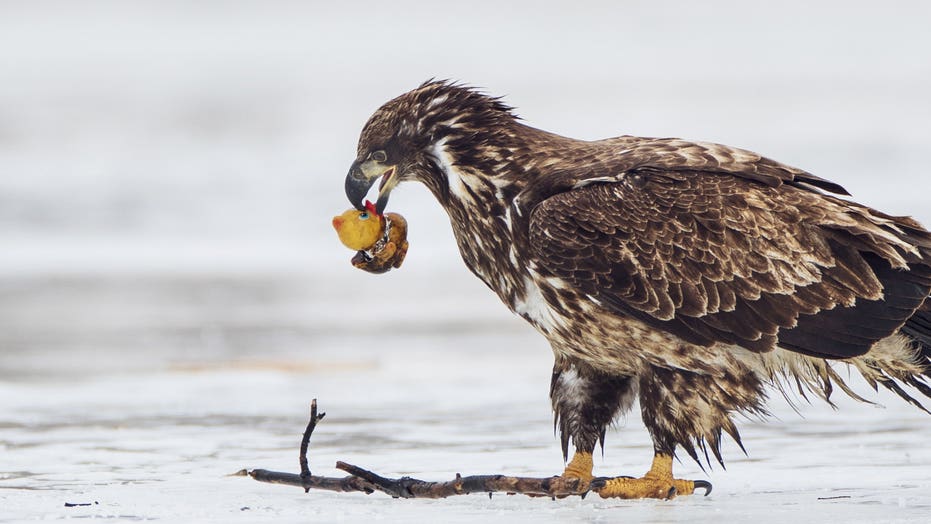 This is just one more reason why this month has gone to the birds.

Fifty-two-year-old David Howells took the photos of the eagle in St. John's, Newfoundland and Labrador, Canada, on March 22. Howells was able to get his camera out prior to the eagle swooping down with its talons extended on what it thought was prey.

The immature bald eagle was seen swooping down to pick up the duck at the weekend before trying to take a bite out of it and tossing it away. (Credit: SWNS)

"At this time of year the eagles become very active," Howells said. "The lake freezes over during the bitter weather. We've actually just got over the biggest amount of snowfall ever. The bald eagle actually has a very high pitched squark so I heard it coming and caught it perfectly as it swooped in."

However, the young eagle may have mistaken the rubber duck for prey, only to be surprised, Howell explained.

The snaps were taken at Quidi Vidi in St. John's, Newfoundland on 22 March. (Credit: SWNS)

"At first it looked like the immature bald eagle was tending to it as if it were a chick," he said. "But then it went to take a bite out of it, realized it wasn't edible, and just threw it away."

According to the National Eagle Center, bald eagles primarily have a diet consisting of fish, but can also eat a number of other animals, including birds, squirrels, raccoons and rabbits.

Bald eagles are no longer considered endangered in the U.S., according to the U.S. Fish and Wildlife Service. However, both bald and golden eagles "are protected under the Bald and Golden Eagle Protection Act and the Migratory Bird Treaty Act," the agency notes.