Planet Earth wobbles as it spins, and now scientists know why 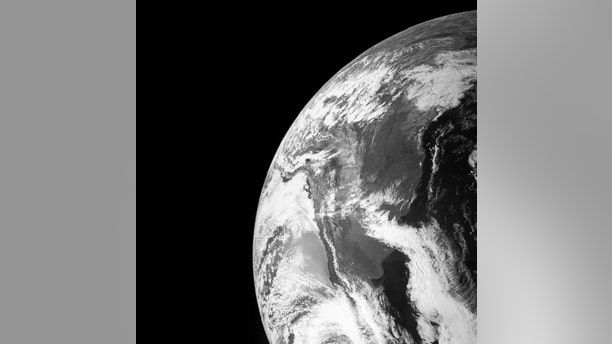 Earth is seen in this image taken by NASA's JunoCam as it flew by Earth, using its gravity to get a boost needed to reach Jupiter on October 9, 2013, in this NASA handout image released to Reuters. (REUTERS/NASA/JPL-Caltech/Malin Space Science Systems/Handout)

Humans are responsible for some of the wobble in Earth's spin.

Since 1899, the Earth's axis of spin has shifted about 34 feet. Now, research quantifies the reasons why and finds that a third is due to melting ice and rising sea levels, particularly in Greenland — placing the blame on the doorstep of anthropogenic climate change.

Another third of the wobble is due to land masses expanding upward as the glaciers retreat and lighten their load. The final portion is the fault of the slow churn of the mantle, the viscous middle layer of the planet.

"We have provided evidence for more than one single process that is the key driver" for altering the Earth's axis, said Surendra Adhikari, an Earth system scientist at NASA's Jet Propulsion Laboratory in Pasadena, California, and a lead researcher on the new study. [Why Does the Earth Rotate?]

Scientists have long known that the distribution of mass around the Earth determines its spin, much like how the shape and weight distribution of a spinning top determines how it moves. Also, Earth's spin isn't perfectly even, as scientists know thanks to slight wiggles in the movements of the stars across the night sky that have been recorded for thousands of years, said Erik Ivins, a study co-author and a senior research scientist at JPL. Since the 1990s, space-based measurements have also confirmed that the Earth's axis of rotation drifts by a few centimeters a year, generally toward Hudson Bay in northeastern Canada.

Researchers knew that a proportion of this wobble was caused by glacial isostatic adjustment, an ongoing process since the end of the last ice age 16,000 years ago. As the glaciers retreat, they relieve the land underneath of their mass. Gradually, over thousands of years, the land responds to this relief by rising like bread dough. (In some places on the edges of the ancient ice sheets, the land might also collapse because the ice had forced it to bulge upward.)

But in the new research, published in the November issue of the journal Earth and Planetary Science Letters, Adhikari and his colleagues found that glacial isostatic adjustment was only responsible for about 1.3 inches of axis wobble per year. That was only about a third of the wobble — 4 inches  — observed each year over the 20th century.

To fill in the gap, the research team built a computer model of the physics of Earth's spin, feeding in data about changes in the balance of land-based ice and ocean waters over the 20th century. The researchers also accounted for other shifts in land and water, such as groundwater depletion and the building of artificial reservoirs, all part of humanity's terraforming of the planet. [What in the World Would Happen If Earth Were to Spin Backward?]

The results revealed that these environmental processes cause another 1.7 inches of wobble each year. The melting of the Greenland ice sheet was a particularly important contributor, the researchers found. That's because Greenland has released a large amount of water that was once locked up on land into the oceans, where its mass has been redistributed, Ivins told Live Science. Mountain glaciers and small ice caps elsewhere have also contributed to sea-level rise, he said; but they aren't as concentrated, and their effects on the Earth's rotation often cancel each other out.

The glaciers and the ice melt still left a third of the wobble unaccounted for, so Adhikari and his team looked inward. The Earth's mantle is not static, he said, but moves by the process of convection: Hotter material from closer to the core rises and cooler material sinks in a cycle of vertical motion. By including convection in the model of Earth's wobble, the researchers had accounted for the last third of the changes in the spin over the 20th century.

It's important to realize that this wobble isn't the prelude to any sort of environmental calamity, Ivins and Adhikari said. It doesn't affect agriculture or climate in and of itself, and any small impact on navigational equipment is easy to correct for.

"The amount [of drift] is not a huge amount," Adhikari said.

But it does give scientists a way to figure out where Earth's mass is and where it's going. For example, Adhikari said, Greenland's melt has become an increasingly large contributor to changing the axis location in the past 15 years, which is pushing the drift eastward.

"That fact is important for climate scientists," Ivins said, "because they can understand, in a global sense, which are the most important mass transports that are going on today."

The JPL website hosts a simulation of the polar wobble and its contributing factors.