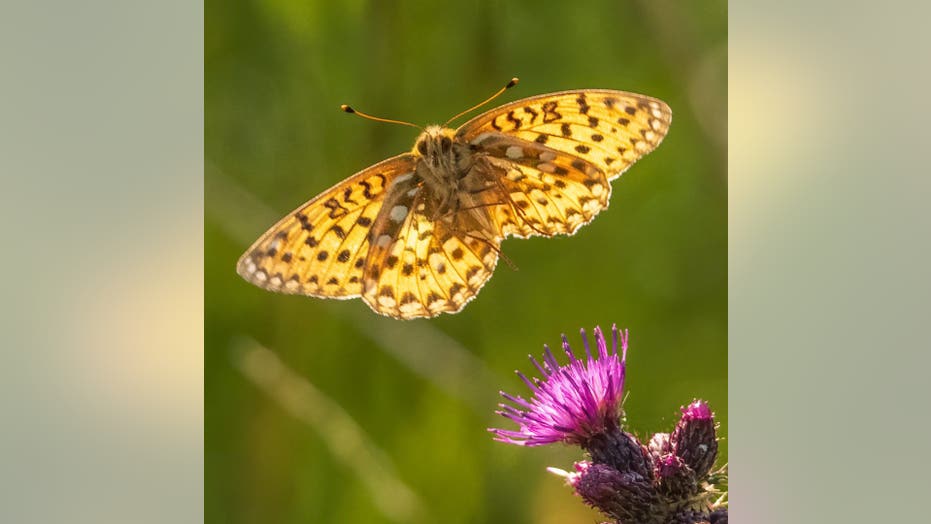 Sometimes, it pays to stop and smell the flowers.

A photographer has captured remarkable photos of endangered butterflies flying off flowers at a nature preserve in the U.K., British news agency SWNS reports.

Andrew Fusek Peters spent two hours in the Shropshire hills to capture the images, one of which shows the exact moment a fritillary leaves a thistle at the Brook Vessons nature reserve.

These incredible close-up images show two of the UK's most rarely seen and endangered butterflies gracefully taking flight from flowers at a nature reserve. (Credit: SWNS)

"I was extremely lucky and honored to capture both butterflies in such crystal-clear detail," Fusek Peters said. "The small pearl-bordered fritillary is now very rare while the dark green fritillary has not been seen in south Shropshire before so this is a first and a record for me. That sequence of shots is something will rarely see as well, the timing has to be perfect."

Fusek Peters, 54, added that the trick to getting the images was waiting for the butterflies to "fly perfectly parallel," while also focusing on the flower.

"It takes a lot of technical skill and of course a camera that shoots at high speed. Plus a lot of persistence," he explained. "I was chasing them around this field for two hours trying to get in position among the grass and thistles. I think I ran half a marathon trying to get these shots."

Despite that, he said he was "delighted" with the pictures he captured, adding the reaction he's gotten from onlookers is "incredible."

According to ButterflyConservation.org, the small pearl-bordered fritillary "remains widespread and locally abundant in Scotland and Wales but has undergone a severe decline in England."

SWNS reports the population of the butterfly has declined 76 percent in the U.K. since the 1970s.