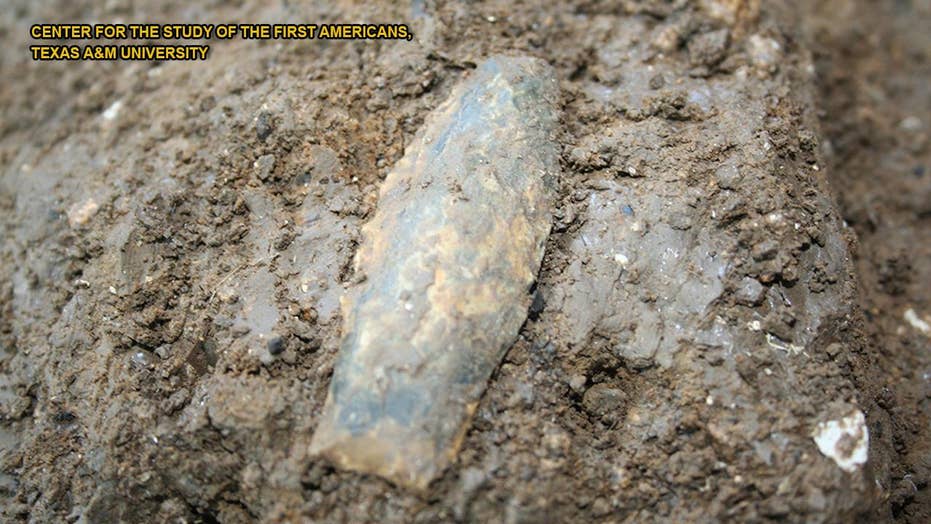 Ancient tools that may give historians a glimpse into America's history were recently discovered just feet below the surface in Texas.

Ancient tools that may give historians a glimpse into America's history were recently discovered just feet below the surface in Texas. Researchers with Texas A&M University made the stunning discovery during a dig at the Debra L. Friedkin site, located just 40 miles northwest of Austin.

Archaeologists have been searching for artifacts at the site near Buttermilk Creek for more than a decade — but this may be their most important find yet.

Michael Waters, professor of anthropology and director of the Center for the Study of the First Americans at Texas A&M, and staff from Baylor University and the University of Texas described the various ancient items they found in a study published in the latest issue of Science Advances. The team reveals they found 3 to 4-inch weapons, including spear points made of chert, under sediment they believe to be at least 15,500 years old.

“The discovery is significant because almost all pre-Clovis sites have stone tools, but spear points have yet to be found. These points were found under a layer with Clovis and Folsom projectile points," Waters said in a statement Wednesday, noting the term Clovis describes tools used by people 13,000 years ago. "The dream has always been to find diagnostic artifacts — such as projectile points — that can be recognized as older than Clovis and this is what we have at the Friedkin site.”

The Clovis people invented the "Clovis point," a spear-like weapon which has been discovered in portions of the U.S. and Mexico. For decades, the Clovis population was considered the first people to enter the North American continent, according to Science Daily.

Like the Clovis point, Waters believes the 15,000-year-old weapons recently uncovered in Austin were used to hunt large animals. Their existence may further support evidence that shows the first American settlers came to the country earlier than historians previously thought.

"Over the past decade, genetic studies of modern Native Americans and prehistoric skeletons have shown that the initial movement of people south of the continental ice sheets occurred as early as ~15 to ~16 ka ago and that there is genetic continuity between the first immigrants to enter the Americas and modern Native Americans," authors of the research explained. "Archaeological studies over the last 25 years show that people successfully occupied the Americas ~14 to ~15 ka ago, in agreement with the genetic estimates."

However, Waters admits there's still a lot of research to be done in regard to the tools to gain better insight into the people who roamed North America back then.

“The findings expand our understanding of the earliest people to explore and settle North America,” Waters said. “The peopling of the Americas during the end of the last Ice Age was a complex process and this complexity is seen in their genetic record. Now we are starting to see this complexity mirrored in the archaeological record.”