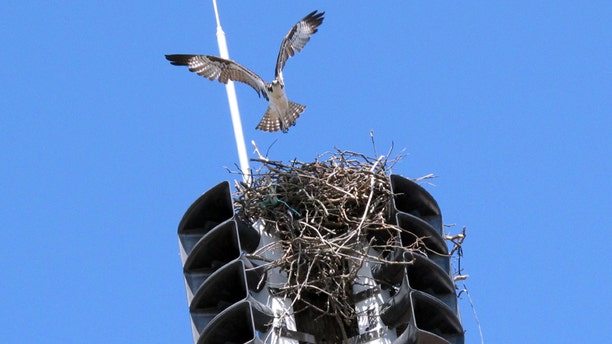 An osprey takes off from its nest inside a fire siren in Spring Lake N.J. on Tuesday May 6, 2014. The Jersey shore town has been forced to turn the siren off until fall to avoid disturbing the bird and any chicks it may have. First responders are notified of emergencies using pagers or cell phones. (AP Photo/Wayne Parry)

A pair of ospreys has quieted a fire alarm in one New Jersey shore town.

The raptors have built a nest inside the fire siren at Spring Lake. By law, the nest can't be disturbed.

So the siren has been turned off for the spring and summer, while firefighters and paramedics rely on pagers and cellphones to alert them of emergencies.

First responders in the resort about 60 miles north of Atlantic City say so far things have been working smoothly.

Spring Lake officials say they may need to create an alternate place nearby for the birds to nest next year, as they tend to return to the same spot.

Officials say they believe several chicks have hatched, but none was visible from the ground on Tuesday.