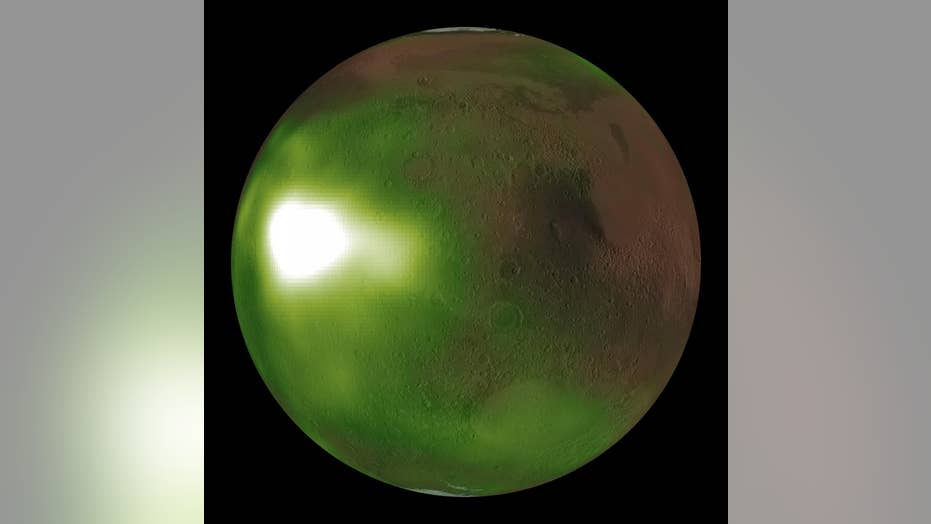 NASA's next Mars rover lifts off from Cape Canaveral, Florida

Phil Keating reports from the scene as the Perseverance rover blasts into space for a 7-month mission.

“The MAVEN team was surprised to find that the atmosphere pulsed exactly three times per night, and only during Mars' spring and fall,” explained NASA’s Goddard Space Flight Center in a statement. “The brightenings occur where vertical winds carry gases down to regions of higher density, speeding up the chemical reactions that create nitric oxide and power the ultraviolet glow.”

Unexpected “waves and spirals” were also spotted over Mars’ winter poles. "MAVEN's images offer our first global insights into atmospheric motions in Mars' middle atmosphere, a critical region where air currents carry gases between the lowest and highest layers," said Nick Schneider, of the University of Colorado's Laboratory for Atmospheric and Space Physics, in the statement.

The research is published in the Journal of Geophysical Research, Space Physics.

NASA’s Mars 2020 Perseverance Rover recently launched on its epic mission to the Red Planet, a journey that is expected to take seven months. The rover is scheduled to land on Mars’ Jezero Crater on Feb 18, 2021.

The mission’s duration on the Red Planet’s surface is at least one Martian year, or about 687 days.

Earlier this month, the space agency’s Curiosity Rover celebrated eight years on the surface of Mars.

NASA’s long-term goal is to send a manned mission to Mars in the 2030s. However, former astronaut Buzz Aldrin thinks a slightly later target date, 2040, is more realistic.

In an interview in 2016, the Gemini 12 and Apollo 11 astronaut told Fox News that he believed astronauts could visit Mars’ moon Phobos by 2040, which could serve as a stepping stone to the Red Planet.