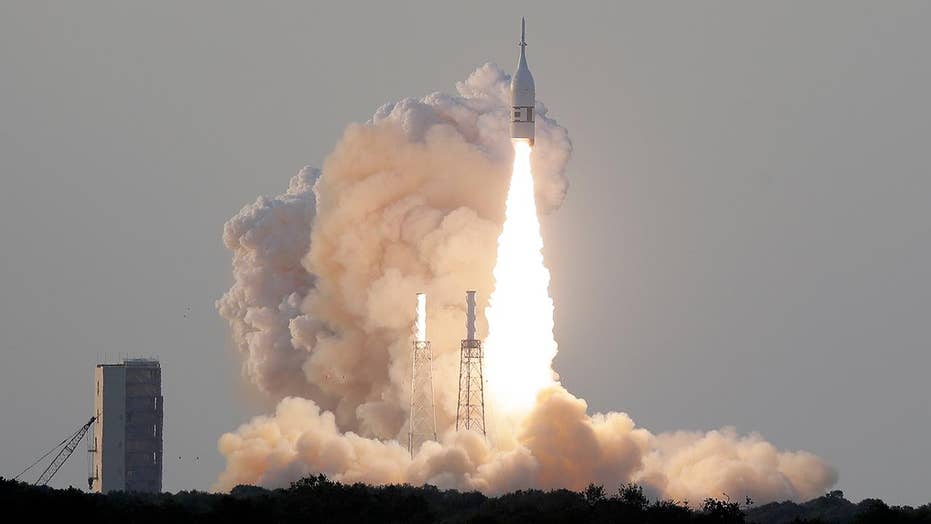 Raw video: NASA performs key test in preparation for future manned missions to the moon with a successful test of the Orion spacecraft's launch abort system from the Space Launch Complex 46 at Cape Canaveral Air Force Station in Florida.

NASA has successfully tested the launch abort system for the Orion crew capsule designed to take astronauts to the Moon.

An unmanned test version of the Orion crew capsule was launched from Cape Canaveral Air Force Station in Florida atop a modified Peacekeeper missile early Tuesday. After reaching an altitude of six miles, the spacecraft’s abort sequence triggered. The capsule continued upward another two miles, then flipped to jettison the abort tower.

“The abort sequence triggered and, within milliseconds, the abort motor fired to pull the crew module away from the rocket,” explained NASA in a statement. “Its attitude control motor flipped the capsule end-over-end to properly orient it, and then the jettison motor fired, releasing the crew module for splashdown in the Atlantic Ocean.”

NASA chose not to use parachutes to keep this test version of the capsule simple and thus save time, and so it crashed into the Atlantic at 300 mph as planned, the three-minute test complete. Twelve data recorders popped off in bright orange canisters before impact, for ocean retrieval.

The space agency confirmed Tuesday that the data recorders have been recovered. “The data recorders are a backup communication system,” it explained. “They were labeled, ejected out of canisters and floated in the water. Each recorder features a beacon and transmitter to assist boats in retrieval.”

The Ascent Abort-2 test successfully demonstrated that the launch abort system can outrun a speeding rocket and pull astronauts to safety, according to NASA.

Officials were delighted with the test. "By all first accounts, it was magnificent,” said NASA's Orion Program Manager Mark Kirasich.

"Congratulations to our @NASA_Orion  team on a successful test of the launch abort system! We are one step closer to sending @NASA_Astronauts to the Moon and beyond to Mars!," tweeted NASA Administrator Jim Bridenstine.

This was the second abort test for Orion, conducted at a speed of more than 800 mph. The first, in New Mexico in 2010, was lower and slower.

The test is part of NASA’s preparations for Artemis missions to the Moon. The U.S. wants to land the next man and the first woman on the Moon by 2024. The astronauts will also be first humans to set foot on the Moon’s South Pole.

The Orion capsule was launched atop a modified Peacekeeper missile. (NASA)

Last year, NASA astronaut Nick Hague and Russian cosmonaut Alexei Ovchinin made a dramatic escape from a failed Soyuz rocket shortly after its launch from the Baikonur Cosmodrome in Kazakhstan.

The spacecraft carrying Hague and Ovchinin was about 30 miles above Earth’s surface when the crew was forced to make a dangerous “ballistic re-entry” into Earth’s atmosphere. After the successful deployment of its parachute, the rescue capsule landed safely in the steppes of Kazakhstan about 30 minutes after the rocket failure.