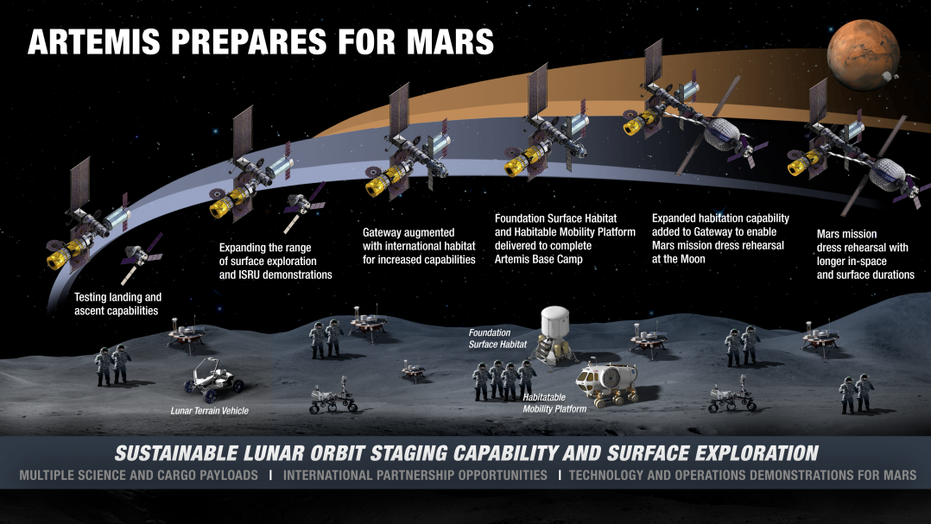 NASA's plan to return to the moon in 2024 could be in jeopardy due to the coronavirus pandemic. Nonetheless, the space agency has put forth plans on how it will build a base on the lunar surface.

The U.S. space agency released a report on what it will do to set up a base on Earth's celestial satellite, as part of its Artemis program. The 13-page report notes that astronauts could spend anywhere between seven and 45 days on the surface of the moon, via a mobile habitat that could support up to four astronauts.

“After 20 years of continuously living in low-Earth orbit, we’re now ready for the next great challenge of space exploration – the development of a sustained presence on and around the Moon,” said NASA Administrator Jim Bridenstine in a statement. “For years to come, Artemis will serve as our North Star as we continue to work toward even greater exploration of the Moon, where we will demonstrate key elements needed for the first human mission to Mars.”

Infographic showing the evolution of lunar activities on the surface and in orbit. (Credit: NASA)

In mid-March, Bridenstine announced the agency’s Michoud Assembly Facility and Stennis Space Center would move to Stage 4. This directive, as a result of the coronavirus pandemic, suspended work on the Space Launch System and Orion, the hardware system that will be used to return astronauts to the lunar surface.

Having a lunar base will allow for the eventual lengthening of trips, including those needed for a trip to Mars, NASA added in the report. "This approach will also allow NASA to test risk mitigation approaches for long-duration mission crew and element systems risks that are required for two-year Mars class missions."

"Once these pieces of the Moon to Mars campaign are delivered and operational, annual human missions with increasingly long durations will enhance the exploration and sustainable development of the lunar surface," NASA wrote in the report.

The work that the astronauts perform on the lunar surface could be testing advanced robotics, as well as work on a "wide set of new technologies."

"Advancing these technologies could enable the production of fuel, water, and/or oxygen from local materials, enabling sustainable surface operations with decreasing supply needs from Earth," the statement explained.

The report makes clear that the U.S. is the leader in space exploration and a base on the moon and further exploration are both vital for America's success in space.

“The U.S. is still the only nation to have successfully landed humans on the Moon and spacecraft on the surface of Mars,” the report states. “As other nations increasingly move out into space, American leadership is now called for to lead the next phase of humanity’s quest to open up the future to endless discovery and growth.”

NASA first revealed its plans for a return to the moon in July 2019 via the Artemis program, the successor to the Apollo program. Artemis will also make history by landing the first woman on the moon.

After Apollo 11 astronauts Neil Armstrong and Buzz Aldrin set foot on the moon on July 20, 1969, only 10 more men, all Americans, walked on the lunar surface. The last was Apollo 17 Mission Commander Gene Cernan, who walked on the surface on Dec. 14, 1972.