NASA chief: Time to clean up all that space junk 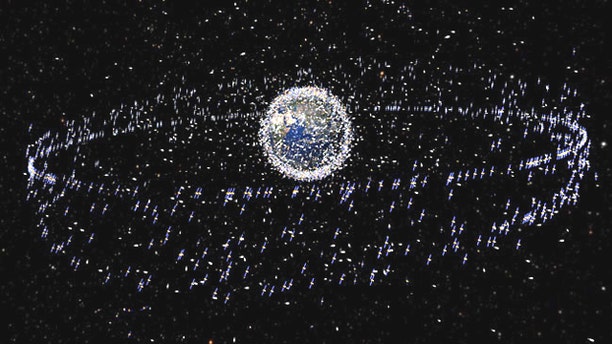 Trackable objects in orbit around Earth. Note: Size of debris is exaggerated relative to the Earth in this artist's interpretation. (ESA)

NASA Administrator Charles Bolden warns that too little is being done to remove debris from space, an issue that has drawn plenty of attention this week after an unknown object made a fiery entry into Earth’s atmosphere.

Speaking Thursday at the Council on Foreign Relations, Bolden said more countries need to step up to the plate and put funding into efforts to clean up space – which is crowded with all sorts of objects, from nonfunctional spacecraft, abandoned launch vehicle stages, mission-related debris and fragmentation debris – all traveling at 17,500 mph.

“Not a lot of countries are putting money into debris removal development, and more of us need to,” he said.

“We are among those that’s not putting a lot of money into debris removal,” he said. “We work a lot on what we call debris mitigation, making rules that say when you put something in space it has to have enough fuel to, when its mission is over, you can either put it into a parking orbit where it won’t come back for a hundred years, or you can safely de-orbit it into the ocean. But that’s not the answer. The answer’s going to be debris removal, and we’ve got to figure out how to do that.”

Within the U.S. Department of Defense, the Joint Functional Component Command for Space (JFCC-Space) currently tracks 23,000 objects in low-Earth orbit. NASA officials have estimated that roughly 500,000 pieces of space junk larger than a marble circle the planet, and there could be more than 100 million tiny fragments, some as small as flecks of paint. 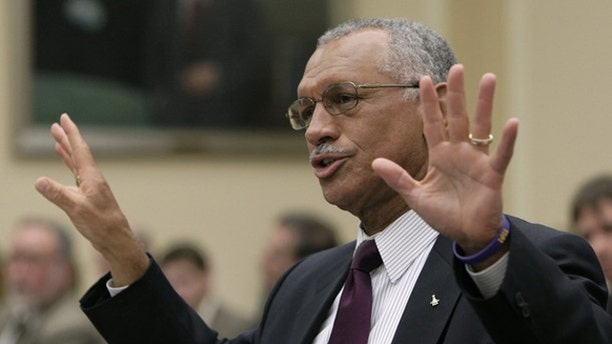 NASA Administrator Charles Bolden testifies before the House Science and Technology committee on Capitol Hill in Washington May 26. (Reuters Photo)

On rare occasions, the space junk enters Earth’s atmosphere as the object known as WT1190F did early on Friday. Experts had forecast that the unknown object – which could be a spent rocket stage, a paneling shed from a recent moon mission, or even a piece of debris dating back to the Apollo missions - would enter Earth’s atmosphere at about 1:20 a.m. ET.

They had predicted a splashdown in the Indian Ocean about 62 miles off the coast of Sri Lanka. But it was unclear if the object actually landed.

For much of his talk, Bolden focused on Mars and the dream of sending  an astronaut first to an asteroid in the 2020s and then the Red Planet in the 2030s. While he didn’t offer any fresh details of the mission, he did defend the idea of sending humans to Mars- rather than leaving its exploration to probes as is done today.

“Robots don’t reason and robots don’t—you know, they don’t make choices the way that human beings do yet. That’s not to say that they won’t someday,” he said, noting the impact that astronaut and geologist Harrison Schmitt made when he was sent to the Moon as part of Apollo 17.

“Everybody believes that if we had put a human on Mars two years ago, when we put Curiosity there, we would know infinitely more about the planet today than we do because we’re relying on this robot kind of creeping across the surface and, you know, giving us little tidbits of stuff when we tell it to do that—because we have to program it each evening so that the next day it will go here and it will take a—take a picture of this,” he said. “But it’s incredibly valuable to have humans there.“

Still, Bolden said such a mission wouldn’t be taken lightly – especially when it comes to the health of the astronauts. The two big challenges, he said, would be the radiation that the astronauts would be exposed to over a long period of time and the psychological impact of being in space for possibly months at a time. Currently, the trip would take eight months.

“If we could go faster — so if there are any of you out there who are propulsion scientists or propulsion engineers and you want to do something for humanity, bring us a rocket that can cut the time to go to Mars in half,” he said. “You know, every day, every second that you spend in transit to Mars is that much more exposure to the human body to potentially harmful radiation.”

Currently, NASA is running a year-long experiment involving astronaut Scott Kelly aboard the International Space Station. Genomicists are looking at Kelly’s DNA and comparing it to that of his Earth-based brother Mark to see if they can detect any changes.

But while Bolden said NASA has “pretty much wrestled to the ground bone loss, muscle mass loss, you know, muscle atrophy and the like, the big challenge will be psychological.”

He talked about a scenario where a female astronaut Skypes home but the delay leaves her young daughter on the other end of the call just staring at a screen.

Then, he brought up the movie “The Martian” where psychological issues play a critical part.

“The guy who played me, what was he worried about in informing the crew that — you know, that Matt Damon was still alive?” he said. “The psychological impact on the crew, you know, knowing that they had left a crew member on Mars who was still living. So psychological problems, psychological issues will be something that we just don’t deal with yet.”