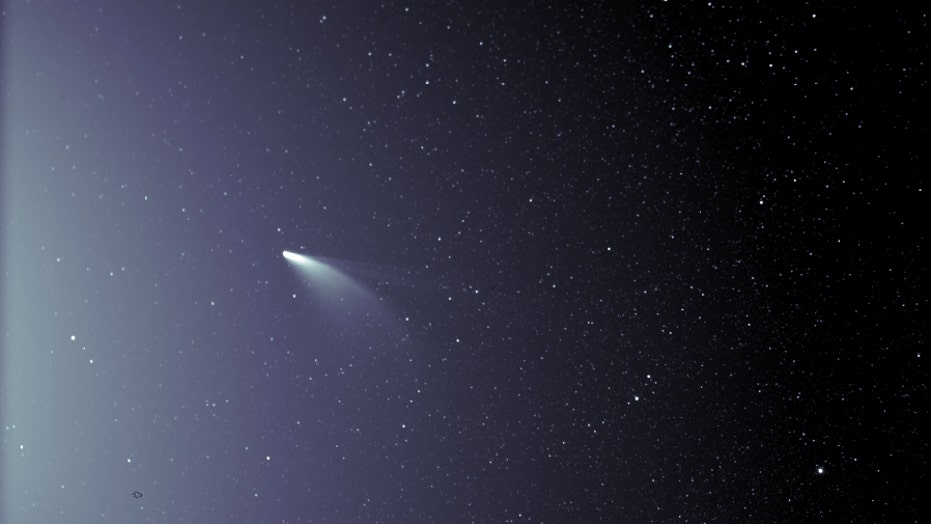 NASA’s Parker Solar Probe has captured a remarkable image of the NEOWISE comet that was discovered in March.

The probe, which recently flew past Venus, was able to capture the twin tails of NEOWISE, also known as C/2020 F3, "when it was particularly active just after its closest approach to the Sun, called perihelion," NASA wrote on its website.

The image was taken by the probe's WISPR instrument, which is used to take images of the sun's outer atmosphere and solar wind in visible light.

An unprocessed image from the WISPR instrument on board NASA’s Parker Solar Probe shows comet NEOWISE on July 5, 2020, shortly after its closest approach to the Sun. The Sun is out of frame to the left. The faint grid pattern near the center of the image is an artifact of the way the image is created. The small black structure near the lower left of the image is caused by a grain of dust resting on the imager’s lens. (Credit: NASA/Johns Hopkins APL/Naval Research Lab/Parker Solar Probe/Brendan Gallagher)

Most comets have two tails, a dust tail and one made of electrically charged molecules according to NASA. However, it's the possibility that NEOWISE could have two ion tails that has intrigued researchers.

"The lower tail, which appears broad and fuzzy, is the dust tail of comet NEOWISE — created when dust lifts off the surface of the comet’s nucleus and trails behind the comet in its orbit," NASA added in the statement.

"The upper tail is the ion tail, which is made up of gases that have been ionized by losing electrons in the sun’s intense light. These ionized gases are buffeted by the solar wind — the sun’s constant outflow of magnetized material — creating the ion tail that extends directly away from the sun," NASA continued. "Parker Solar Probe’s images appear to show a divide in the ion tail. This could mean that comet NEOWISE has two ion tails, in addition to its dust tail, though scientists would need more data and analysis to confirm this possibility."

A COMET IS VISIBLE THIS MONTH: NASA HAS THESE TIPS FOR SKYWATCHERS

The comet has been visible to the naked eye, NASA said on its website.

“Through about the middle of the month, the comet is visible around 10 degrees above the northeastern horizon (the width of your outstretched fist) in the hour before dawn," the space agency added. "From mid-July on, it's best viewed as an evening object, rising increasingly higher above the northwestern horizon.”

NASA notes that the comet’s closest approach to Earth will be on July 22, at a distance of about 64 million miles.