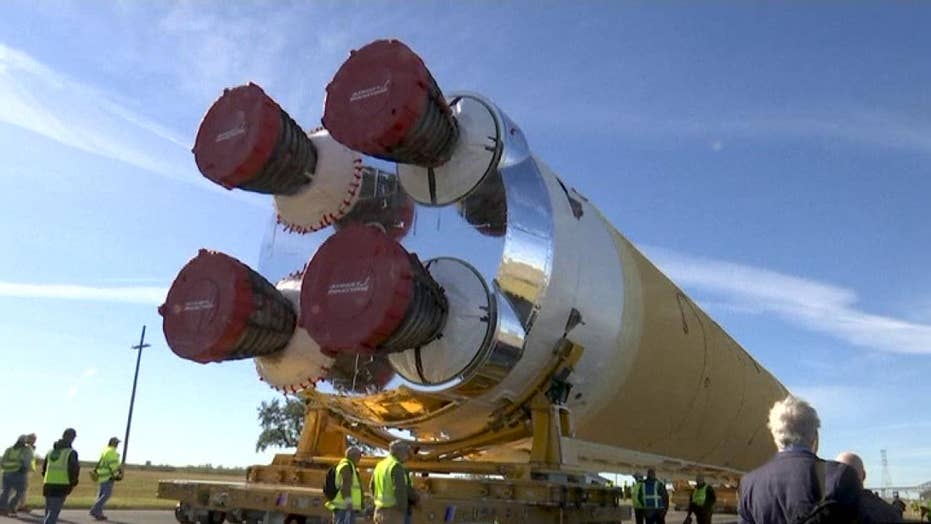 Core stage of NASA rocket rolled to river for testing.

NASA astronauts will soon launch into space from U.S. soil for the first time in almost 10 years, vowed Vice President Mike Pence, during a speech Wednesday.

Pence, who is chairman of the National Space Council, gave the speech at NASA’s Langley Research Center in Virginia.

“Before we even get to the summer, with the strong support of all of you, the United States will return American astronauts to space on American rockets from American soil,” he explained. “We’re going back, and we going back from the USA.”

Since the retirement of the space shuttle in 2011, the U.S. has been relying on Russian Soyuz rockets, launched from Kazakhstan, to get astronauts to the International Space Station.

STS-135, the last space shuttle mission, launched from NASA's Kennedy Space Center on July 8, 2011. The space shuttle Atlantis carried four NASA astronauts on the mission to resupply the ISS, as well as an experiment for robotically refueling satellites in space.

Pence also discussed the plan to put Americans on the moon again. NASA’s Artemis program aims to land American astronauts on the moon by 2024 and establish a sustainable human presence on Earth’s natural satellite.

“Together, we’re going to ensure that the first woman and the next man on the moon will be American astronauts,” he said. “We’re going to establish a foundation for an eventual mission to Mars – we’re going moon to Mars.”

An authorization bill introduced last month by Rep. Kendra Horn, D-Okla., suggests 2028 as an alternate deadline for putting U.S. astronauts back on the moon, in order to boost the space agency’s long-term plans for crewed Mars exploration. However, NASA would still have the option to launch the mission earlier if resources were available, Space.com reports.

NASA wants to send astronauts to Mars in the 2030s, although Apollo 11’s Aldrin thinks that a slightly later target date of 2040 is more realistic. In an interview in 2016, the Gemini 12 and Apollo 11 astronaut told Fox News that by 2040, astronauts could visit Mars’ moon Phobos, which could serve as a sort of stepping stone to the Red Planet.

During his speech on Wednesday, Pence also praised the incredible contribution of the famous African-American “hidden figures” who helped the U.S. win the space race.

“Here at Langley Research Center you broke the color barrier as well and all of America celebrates,” he said. “You all know we’re standing in the home of the legendary ‘hidden figures’ – African-American women, also known as ‘human computers,’ who, despite the injustice of working in a segregated facility, lent our nation their incredible intellects and talents and helped us not only win the space race but also become a more perfect union.”