Mysterious creatures, similar to jellyfish, washing up on West Coast 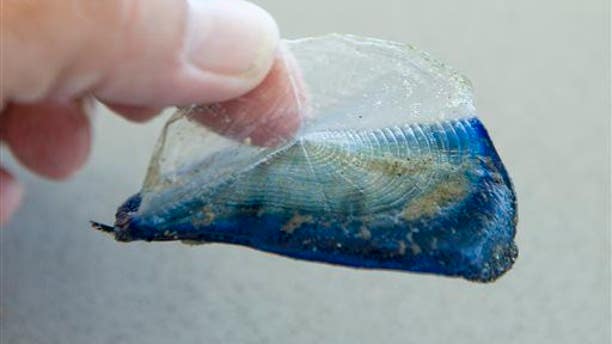 Ocean-goers up and down the West Coast have spent weeks photographing thousands of mysterious sea creatures washing up on seashores from Washington to California, reports CNN.

Called Velella velella, or "by-the-wind sailors," the silver-purple sea creatures that vaguely resemble jellyfish are typically found well out in the ocean, but experts say not to worry, unusually strong winds are the likely culprit, the Los Angeles Times reported in an earlier story.

"I'm very excited to see how interested people have been with it," one expert tells the New York Daily News. "It's a great example of the fact that the ocean is 95% unexplored." The first sightings this summer were up in Washington and Oregon, but now that they're appearing on more populated shores in California, they're also making quite a splash on Twitter, reports the Latino Post.

The small creatures have a tiny fin that acts a bit like a sail, allowing them to float along the ocean's surface. And while breezes tend to take them well out to sea, they can occasionally be carried onto shore if conditions are just right, notes National Geographic.

Velella velella can sting, but it's not "very potent" on humans, says one marine expert. (Meanwhile, the jellyfish population is booming.)