Mars may well have liquid water at or near its surface, but a new study suggests that water vapor is escaping the Red Planet faster than previously thought.

The research, published in the journal Science, looked at data from the Trace Gas Orbiter, which is orbiting Mars as part of the ExoMars program, and found that seasonal changes influenced how water vapor was distributed in the planet's atmosphere. 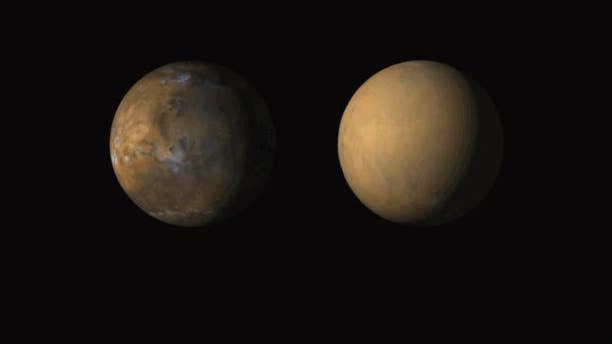 The Mars Color Imager (MARCI) camera onboard NASA's Mars Reconnaissance Orbiter (MRO) shows the typical state of Mars, seen here in May 2018, and what the planet looked like during a planet-encircling dust storm in July 2018. (NASA/JPL-Caltech/MSSS)

"Water profiles during the 2018–2019 southern spring and summer stormy seasons show that high-altitude water is preferentially supplied close to perihelion, and supersaturation occurs even when clouds are present," the abstract added. "This implies that the potential for water to escape from Mars is higher than previously thought."

During the warmest part of the year on Mars, there are significant chunks of the atmosphere that achieve the aforementioned "supersaturation," containing anywhere between 10 and 100 times more vapor than should be allowed.

Speaking with Space.com, the study's lead author, Franck Montmessin, said this "supersaturation" is not seen "on any other body of the solar system."

Montmessin added that researchers had expected the amount of water vapor reaching the upper portion of the atmosphere "should have been limited by the cold temperature up above and be bound to condense into clouds."

Further research is needed to get a better idea of how much water vapor is entering the upper portion of the atmosphere so researchers can understand just how much is leaving.

In 2018, scientists uncovered "a stable body of liquid water" on Mars, a "well-defined, 20-kilometer-wide zone," sitting below the Red Planet's southern polar ice cap. Layers of ice buried a mile beneath the planet's north pole were discovered in May 2019.

In December 2019, NASA researchers published a “treasure map” where water ice may be found on the planet.

2020 is poised to be a big year for the exploration of Mars, as NASA launches the Mars 2020 rover (which will be renamed prior to launch), joining the still functioning Curiosity rover and the now-deceased Opportunity rover on the Red Planet.

The Mars 2020 rover, which is slated to launch July 17, will detect if there is any fossilized evidence of extraterrestrial beings, in addition to other tasks. In 2019, Curiosity detected oxygen that "behaves in a way that so far scientists cannot explain."

Several months prior to that, the rover also detected an "unusually high" level of methane on Mars. On Earth, methane is produced both biologically and geologically, although it is not clear what caused the methane spike on Mars.