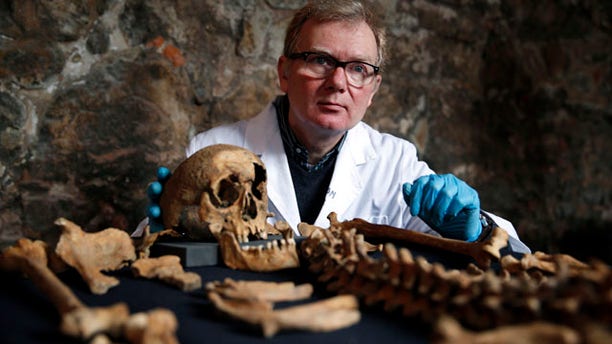 March 26, 2014: Don Walker, a human osteologist with the Museum of London, poses for photographers, with one of the skeletons found by construction workers under central London's Charterhouse Square. Twenty-five skeletons were uncovered last year during work on Crossrail, a new rail line that's boring 13 miles of tunnels under the heart of the city. Archaeologists immediately suspected the bones came from a cemetery for victims of the bubonic plague that ravaged Europe in the 14th century. The Black Death, as the plague was called, is thought to have killed at least 75 million people, including more than half of Britain's population. (AP Photo/Lefteris Pitarakis)

You can learn a lot from a tooth.

Molars taken from skeletons unearthed by work on a new London railway line are revealing secrets of the medieval Black Death -- and of its victims.

This week, Don Walker, an osteologist with the Museum of London, outlined the biography of one man whose ancient bones were found by construction workers under London's Charterhouse Square: He was breast-fed as a baby, moved to London from another part of England, had bad tooth decay in childhood, grew up to work as a laborer, and died in early adulthood from the bubonic plague that ravaged Europe in the 14th century.

The poor man's life was nasty, brutish and short, but his afterlife is long and illuminating.

"It's fantastic we can look in such detail at an individual who died 600 years ago," Walker said. "It's incredible, really."

The 25 skeletons were uncovered last year during work on Crossrail, a new rail line that's boring 13 miles of tunnels under the heart of the city. Archaeologists immediately suspected the bones came from a cemetery for plague victims. The location, outside the walls of the medieval city, chimes with historical accounts. The square, once home to a monastery, is one of the few spots in the city to stay undisturbed for centuries.

To test their theory, scientists took one tooth from each of 12 skeletons, then extracted DNA from the teeth. They announced Sunday that tests had found the presence of the plague bacterium, Yersinia pestis, in several of the teeth, meaning the individuals had been exposed to -- and likely died from -- the Black Death.

The findings didn't stop there. Archaeologists, historians, microbiologists and physicists worked together to apply techniques from several scientific disciplines to the discovery.

These were, by and large, poor people. Many of the skeletons showed signs of malnutrition consistent with the "Great Famine" that struck Europe 30 years before the Black Death. Many had back injuries suggesting lives of hard labor. One man became a vegetarian late in life, indicating he may have entered an order of monks.

Archaeologists were surprised to discover that the skeletons lay in layers and appeared to come from three different periods: the original Black Death epidemic in 1348-1350, and later outbreaks in 1361 and the early 15th century.

"It suggests that the burial ground was used again and again for the burial of plague victims," said Jay Carver, Crossrail's lead archaeologist.

The Black Death is thought to have killed at least 75 million people, including more than half of Britain's population, yet the burials suggest a surprisingly high degree of social order -- at first. As the plague ravaged continental Europe -- borne westward by fleas on rats -- city fathers leased land for an emergency burial ground. The burials were simple but orderly, the bodies wrapped in shrouds and laid out in neat rows, sealed with a layer of clay.

The later skeletons, however, show more signs of upper-body injuries, consistent with a period of lawlessness and social breakdown.

Archaeologists are planning a new dig this summer to learn how many bodies lie under the square. Carver says the number appears to be in the "low thousands."

And the teeth may not have yielded all their secrets. Experts in ancient DNA at McMaster University in Canada are working to sequence the plague genome found in the teeth, in order to learn more about a disease that still infects several thousand people a year around the world. Most patients recover if treated early with antibiotics.

Scientists want to know if the 14th-century disease is the same as the modern version, or whether the disease has evolved. Study of DNA from the teeth of skeletons discovered in the 1980s at another London plague cemetery suggested the bug was largely unchanged, but the scientific jury is still out.

Brendan Wren, a professor of molecular biology at the London School of Hygiene and Tropical Medicine, said the new information could help scientists "understand how the plague bacillus -- and other nasty bugs -- become so virulent to humans."

"It is useful information that could warn and avert potential epidemics and pandemics," he said.