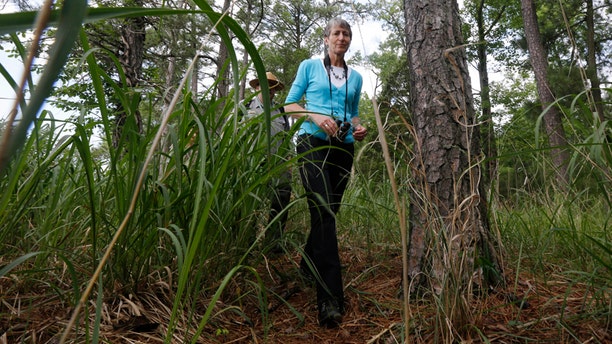 Led by National Park Service rangers, Jewell trekked around the island, where some sections now lie beneath the James River, and heard of the devastation in 2003 when Hurricane Isabel raked the low-lying landscape. The storm left many parts of the island underwater and destroyed thousands of artifacts retrieved from archaeological digs. Many are still being restored.

Dorothy Geyer, a Park Service natural resource specialist, said a 1 1/2-foot rise in sea level would put 60 percent of the island under water and a 4-foot -plus rise would increase that number to 80 percent.

In an interview with The Associated Press between her stops, Jewell said Jamestown is certainly vulnerable.

"I know enough now having been in this job looking at vulnerable sites that this is a highly vulnerable site," Jewell said. "We don't have very many places in the United States that talk about the super-early history of settlers connecting with the native people of the land, so this is a really an important place."

Jewell said her visit to Jamestown is part of the Obama administration's push to address climate change, including its ambitious plan announced Monday to reduce gases from the nation's power plants blamed in part for global warming.

"It's very clear we have global warming and sea level rise and this is a hot spot for it," Jewell said. "And what's at risk is the history of our country."

Jamestown was settled in 1607 by Europeans, including Capt. John Smith. When European settlers arrived, there already was a thriving population of Native Americans led by paramount Chief Powhatan. The remnants of both native people and settlers can be found on the island.

The first settlers found a land defined by water, and that landscape has only shifted more and more that way. Some parts of the island are only feet above sea level.

The Tidewater of Virginia and sections of the Chesapeake Bay are among the most vulnerable to sea change in the world. The city of Norfolk is second only to New Orleans in the U.S. in terms of the threat posed by rising seas.

While climate change is a big factor, the region is also sinking — the result of a meteor that gouged out the Chesapeake Bay 35 million years ago.

The tour followed a report in May by the Union of Concerned Scientists that lists Jamestown as among 30 historic and cultural sites in the nation that are at risk because of climate change.

Jewell was an enthusiastic tourist, trekking through mosquito-infested wetlands and through stands of loblolly pines as she peppered her guides with questions. She visited a glass-making site and a former Confederate outpost, among other spots. Her last visit was 15 years ago.

At Black Point, the eastern-most point of land on the island, she saw where waters had reclaimed 20 feet of the island through the years.

"Eleven years and you're still battling mold," Jewell said to Melanie A. Pereira, the curator.

Jewell's tour concluded with a roundtable discussion by climate scientists.