NASA's Hubble Space Telescope captured the comet 21/Borisov zooming through our solar system at a breakneck speed of 175,000 kilometers per hour.

The spectacular newly released images were taken from a distance of just under 300 million kilometers, officials said.

“Hubble gives us the best measure of the size of comet Borisov’s nucleus, which is the really important part of the comet,” said David Jewitt, a professor of planetary science and astronomy at the University of California Los Angeles, in a statement.

The first image shows the comet in front of a distant spiral galaxy; the galaxy's bright core is smeared in the image because Hubble was tracking the comet. 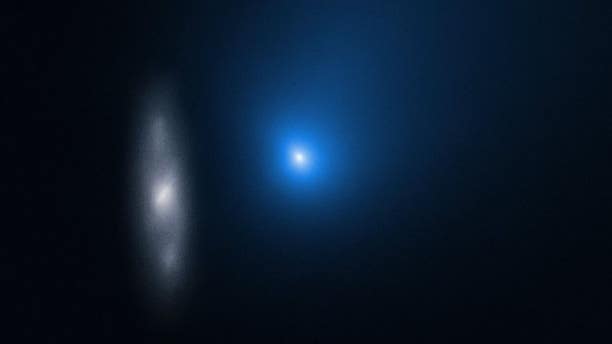 “Surprisingly, our Hubble images show that its nucleus is more than 15 times smaller than earlier investigations suggested it might be. The radius is smaller than half a kilometer. This is important because knowing the size helps us to determine the total number, and mass, of such objects in the solar system, and in the Milky Way. Borisov is the first known interstellar comet, and we would like to know how many others there are.”

According to scientists, 2I/Borisov may represent only the beginning of a series of discoveries of interstellar objects that visit our solar system.

It's possible that there are thousands of such interstellar objects here at any given time; however, most of them are too faint to be detected with present-day telescopes.