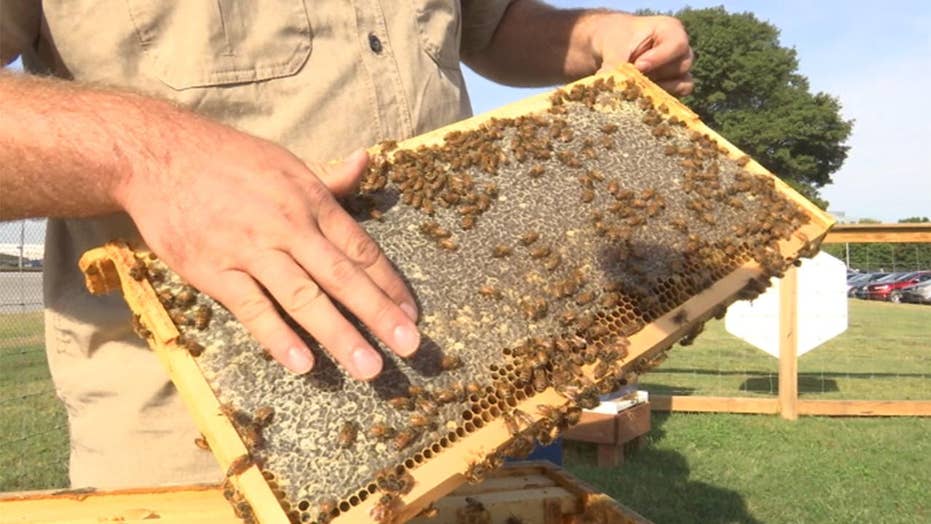 Beekeepers continue to report alarmingly low numbers of honey bees, prompting unusual companies to jump into the bee biz to help ramp up their population.

ATLANTA – Between the rumblings of rolling suitcases and idling aircraft engines, some travelers may miss the new buzzing sound at the world’s busiest airport.

Through a partnership with Bee Downtown – a start-up that introduces beehives to companies in cities – Delta is the first U.S. airline to integrate honeybees into its world headquarters, which straddles Atlanta International Airport.

Companies like Delta are introducing honey bees in creative ways to ramp up the insect's numbers, which have been starkly low the past decade, and maintain the bee's billion-dollar impact on America's agricultural economy.

“All this is honey under here,” beekeeper Nicholas Weaver said, showing off a frame from an apiary – man-made beehive – swarming with the insects.

“That is ready to be eaten,” he added, before pushing his finger through the wax, snagging a bit of honey and sucking off the golden goo. “It’s good, it’s sweet.”

Delta introduced three apiaries at the edge of its headquarters in Atlanta earlier this year. They sit 1,000 yards away from aircrafts being hosed down, taxiing on the runway and even taking off.

“They have these boxes to use as their home in an area where they might not always have one,” Weaver said, pointing to the hives, thematically painted with planes and Delta’s logo.

Weaver estimated the 150,000 bees – surrounded by a wooden fence, decorated with brightly colored informational signs – will produce 150 pounds of honey next year. He said this set of hives is “surprisingly” the most successful of Bee Downtown’s Atlanta apiaries.

The aviation industry is responsible for nearly 10 percent of transportation-related greenhouse gas emissions, according to the Environmental Protection Agency. A Delta executive said the partnership with Bee Downtown is one way the airline is trying to make amends.

“Carbon emissions is something that as an airline we recognize is an environmental footprint that we have, and we do lots of things to try offset that,” said Christine Boucher, managing director of global environment, sustainability and compliance for Delta.

On average, beekeepers in the U.S. lost an estimated 40 percent of their managed honey bee colonies last year (April 2017-April 2018), according to Bee Informed, a nationwide collaboration of research efforts to better understand the decline of honeybees. Arizona’s winter colony losses topped 70 percent.

These numbers are alarming, considering the impact bees have on society, said Jennifer Berry, a research professional and entomologist at the University of Georgia. According to the U.S. Department of Agriculture, pollination is responsible for more than $15 billion in added crop value.

Berry said honeybee populations have been declining for decades “truthfully, since 1945, after WWII.”

That's why these environmental efforts by Delta, though quirky, and other companies have added significance.

“I was a little surprised when I got the email,” Boucher said. “I really knew nothing about bees until we started working with Bee Downtown.”

Now, Boucher unwaveringly dips her fingers in the frames of honey, as bees fly around her, some even landing on the bare skin of her arms.

But Delta is not the only company welcoming the yellow and black pollinator in unusual places.

Beehives with an artsy take serve as the centerpiece in several Miami neighborhoods through the non-profit, Public Hives.

Along the Jersey shore, a hospital joined the bee business this year, hosting hives on a rooftop.

Although honeybees are great pollinators, introducing them in large numbers to heavily populated areas often raises eyebrows because of a less desirable part of their reputation — their sting.

“[I] understand the bee population is going down, but you know that’s scary – 150,000 bees,” Pam Getkin said in Hartsfield-Jackson Atlanta International Airport, as her granddaughter clung to her hip.

Ken Souchek, senior manager of operations at Ocean Medical Center, admitted the New Jersey hospital’s beehives were at first a source of anxiety. He said, several people even asked him, “Are you crazy?”

But Souchek said through transparency and education, the rooftop of 100,000 honey bees “turned from a place of fear and anxiety…into a Zen space.” Souchek said no one has been stung inside the hospital since the implementation of hives in April.

Patients in neighboring buildings can look through windows and watch employees tend to the gardens and hives in T-shirts and shorts. “It’s a diversion from stressors [patients] are facing,” Souchek said. “No one wants to be at the hospital.”

Delta and Public Hives use a similar educational approach to alleviate concerns.

“We relate a lot of [bees’] behaviors to human beings and how we would react if A, B and C happened,” said Danielle Bender, founder of Public Hives. “The main thing that anyone has to remember is that bees exist in the wild regardless if there is a beehive or not; there is really nothing you can do.”

Entomologists assure honeybees are typically not aggressive. They hope educational efforts will alleviate public concerns, and perhaps even be the saving grace for this crucial branch of nature.