Has Noah's Ark Been Found on Turkish Mountaintop? 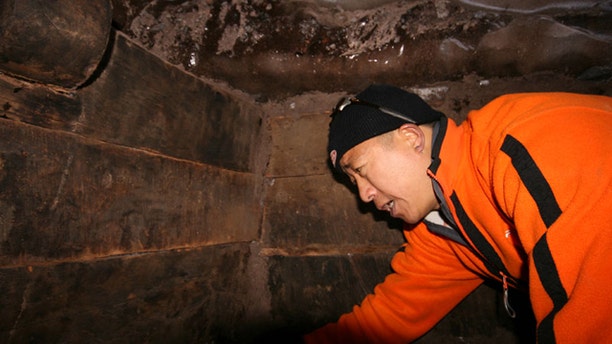 An explorer examines wooden beams inside what some are nearly certain is the remains of Noah's Ark. (Noah’s Ark Ministries International)

A group of Chinese and Turkish evangelical explorers say wooden remains they have discovered on Mount Ararat in eastern Turkey are the remains of Noah's Ark.

The group claims that carbon dating proves the relics are 4,800 years old, meaning they date to around the same time the ark was said to be afloat. Mt. Ararat has long been suspected as the final resting place of the craft by evangelicals and literalists hoping to validate biblical stories.

Yeung Wing-Cheung, from the Noah's Ark Ministries International research team that made the discovery, said: "It's not 100 percent that it is Noah's Ark, but we think it is 99.9 percent that this is it."

There have been several reported discoveries of the remains of Noah's Ark over the years, most notably a find by archaeologist Ron Wyatt in 1987. At the time, the Turkish government officially declared a national park around his find, a boat-shaped object stretched across the mountains of Ararat.

Nevertheless, the evangelical ministry remains convinced that the current find is in fact more likely to be the actual artifact, calling upon Dutch Ark researcher Gerrit Aalten to verify its legitimacy.

“The significance of this find is that for the first time in history the discovery of Noah’s Ark is well documented and revealed to the worldwide community,” Aalten said at a press conference announcing the find. Citing the many details that match historical accounts of the Ark, he believes it to be a legitimate archaeological discovery.

“There’s a tremendous amount of solid evidence that the structure found on Mount Ararat in Eastern Turkey is the legendary Ark of Noah,” said Aalten.

Representatives of Noah's Ark Ministries said the structure contained several compartments, some with wooden beams, that they believe were used to house animals.The group of evangelical archaeologists ruled out an established human settlement on the grounds none have ever been found above 11,000 feet in the vicinity, Yeung said.

During the press conference, team member Panda Lee described visiting the site. “In October 2008, I climbed the mountain with the Turkish team. At an elevation of more than 4,000 meters, I saw a structure built with plank-like timber. Each plank was about 8 inches wide. I could see tenons, proof of ancient construction predating the use of metal nails."

We walked about 100 meters to another site. I could see broken wood fragments embedded in a glacier, and some 20 meters long. I surveyed the landscape and found that the wooden structure was permanently covered by ice and volcanic rocks."

Local Turkish officials will ask the central government in Ankara to apply for UNESCO World Heritage status so the site can be protected while a major archaeological dig is conducted.

The biblical story says that God decided to flood the Earth after seeing how corrupt it was. He then told Noah to build an ark and fill it with two of every animal species.

After the flood waters receded, the Bible says, the ark came to rest on a mountain. Many believe that Mount Ararat, the highest point in the region, is where the ark and her inhabitants ran aground.

Read more at The Sun.