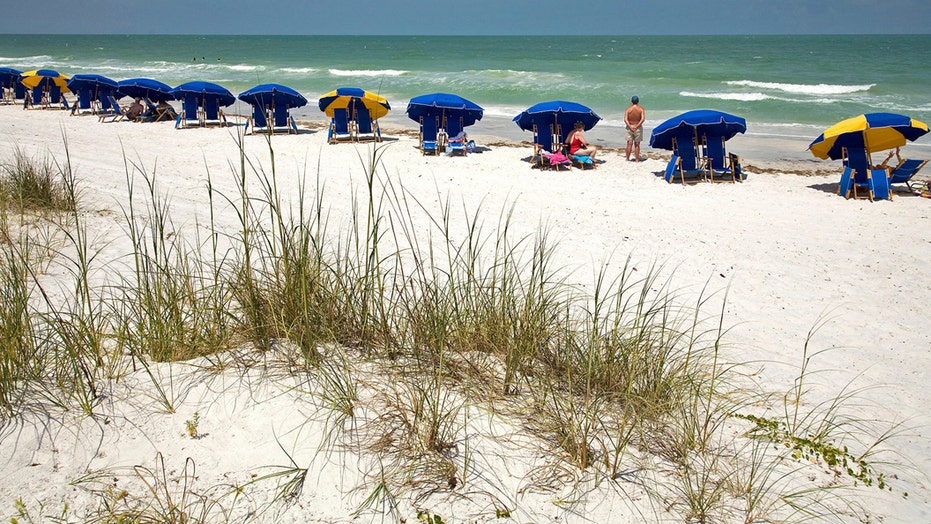 Almost half of the world's sandy beaches could be gone by 2100 if climate change continues as is, according to a new study published on Monday.

The research, published in the scientific journal Nature Climate Change, forecasts that coastlines, which are densely populated, could see further erosion. The scientists used satellite imagery to track how beaches have changed over the past 30 years.

"A substantial proportion of the world’s sandy coastline is already eroding, a situation that could be exacerbated by climate change," researchers wrote in the study's abstract. "Here, we show that ambient trends in shoreline dynamics, combined with coastal recession driven by sea level rise, could result in the near extinction of almost half of the world’s sandy beaches by the end of the century."

The main beach at Caladesi Island State Park, a barrier island along the Gulf of Mexico, on Florida's West Coast, in a 2008 file photo.  (AP Photo/Craig Litten)

Speaking with The Associated Press, the study's lead author, Michalis Vousdoukas, said that half of these beaches "will experience erosion that is more than 100 meters. It's likely that they will be lost.”

Beaches are valuable for recreation, tourism and wildlife, while also providing a natural barrier that protects coastal communities from waves and storms. A study published in February suggested that extreme weather events caused by climate change could result in an economic recession "the likes of which we've never seen before."

Many coastal areas, including beaches, are already heavily affected by human activity such as seashore construction and inland dams, which reduce the amount of silt flowing into oceans that's crucial for beach recovery.

"A substantial proportion of the threatened sandy shorelines are in densely populated areas, underlining the need for the design and implementation of effective adaptive measures," the authors wrote in the study's abstract.

The popular beach of Navagio, or Shipwreck Beach, on the western island of Zakynthos, Greece, in a  2017 file photo.  (AP Photo/Petros Karadjias)

Some places will be affected significantly worse than others. The study's authors estimate that Gambia and Guinea-Bissau in West Africa could lose more than 60 percent of their beaches.

Australia could be the worst hit in terms of total beach coastline lost, at more than 7,500 miles. The U.S., Canada, Mexico, China, Iran, Argentina and Chile are also at risk of losing thousands of miles of coastline, the study added.

Multiple scenarios were taken into account by Vousdoukas and the other researchers, including one where there is a 2.4 degree Celsius rise in global temperatures and another one that rises twice that amount.

The landmark Paris Climate Agreement, which was agreed to in 2015 under the Obama administration, was not taken into account, Vousdoukas told the AP, because it is considered unlikely to be achieved. In early November, the Trump administration began its formal withdrawal from the agreement.

As part of the Paris Climate Agreement, which nearly 200 nations signed, including China, the long-term goal is to limit the increase to 1.5 degrees Celsius.

A man fishes along the receding banks of the Salton Sea near Bombay Beach, Calif., in 2015. (AP Photo/Gregory Bull, File)

Despite the dire outcome of the study, not all hope is lost. The study's authors said that even a "moderate" reduction in greenhouse gas emissions could prevent 40 percent of the potential shoreline retreat.