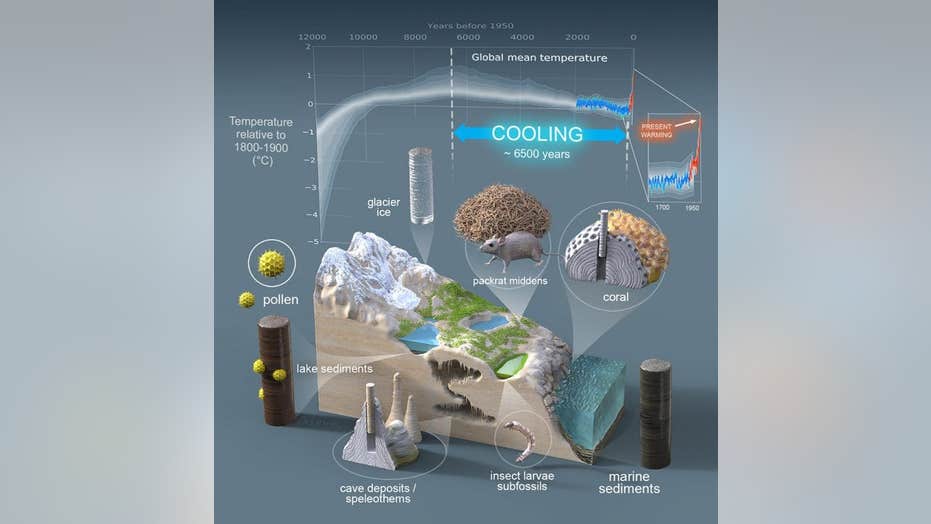 A new study noted that global warming linked to human activity has wiped out the previous 6,500 years of natural global cooling.

The research notes that the average temperature has risen 1 degree Celsius (1.8 degrees Fahrenheit) since the mid-19th century. This suggests "that the global average temperature of the last decade (2010-2019) was warmer than any time during the past 12,000 years," according to a statement accompanying the study.

“Before global warming, there was global cooling,” the study's lead author, Darrell Kaufman, said in a statement. “Previous work has shown convincingly that the world naturally and slowly cooled for at least 1,000 years prior to the middle of the 19th century, when the global average temperature reversed course along with the build-up of greenhouse gases."

Kaufman continued: "This study, based on a major new compilation of previously published paleoclimate data, combined with new statistical analyses, shows more confidently than ever that the millennial-scale global cooling began approximately 6,500 years ago.”

While the cooling was "subtle," at approximately 0.1 degree Celsius per 1,000 years, it was likely caused by slow cycles in the Earth's orbit. This resulted in the ‘Little Ice Age’ of recent centuries,” study co-author Michael Erb added.

The experts were able to rebuild the average global temperature from the past 12,000 years to come up with their findings, looking at a variety of inputs, including "lake deposits, marine sediments, peat and glacier ice, to infer past temperature changes."

By going back and looking at data from the past 12,000 years, researchers believe they will be able to forecast future changes to the climate with better accuracy, according to study co-author Cody Routson.

"However, future climate will also be influenced by natural factors, and it will be complicated by the natural variability within the climate system," Routson added. "Future projections of climate change will be improved by better accounting for both anthropogenic (human-caused) and natural factors."

The research was published in Nature Research's Scientific Data.

A study published in May noted that "potentially fatal combinations" of heat and humidity were showing up "decades" before they were expected.

A different study, also published in May, suggested that if global temperatures rise by another 3.5 degrees Celsius, drastically altering the climate, sea levels could rise by an additional 4 feet by the end of the century and 16 feet by the year 2300.