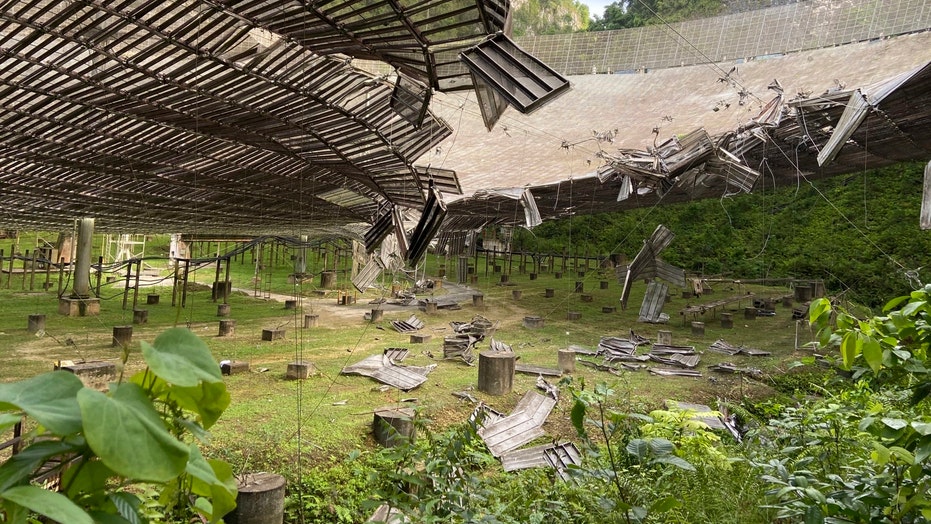 The National Science Foundation’s Arecibo Observatory in Puerto Rico has been damaged by a broken cable.

The observatory is one of the world’s largest single-dish radio telescopes.

The University of Central Florida, which manages the observatory, explained that a cable that helps support a metal platform above the observatory broke on Monday, causing a 100-foot gash on the telescope’s reflector dish.

POTENTIALLY HAZARDOUS ASTEROID THAT ZIPPED PAST EARTH HAS ITS OWN 'MOON'

It is not clear what caused the cable to break, according to the university.

This photo provided by the Arecibo Observatory, shows the damage done by a broken cable that supported a metal platform, creating a 100-foot gash to the radio telescope's reflector dish in Arecibo, Puerto Rico, Tuesday, Aug. 11, 2020.  (Arecibo Observatory via AP)

“We have a team of experts assessing the situation,” said Francisco Cordova, the observatory’s director, on the University of Central Florida’s website. “Our focus is assuring the safety of our staff, protecting the facilities and equipment, and restoring the facility to full operations as soon as possible, so it can continue to assist scientists around the world.”

The university said eight panels in the dome also were damaged and the platform used to access the dome is now twisted.

Earlier this year scientists used radar images from the observatory to reveal that a “potentially hazardous asteroid” that flew past Earth is so large that it has its own moon.