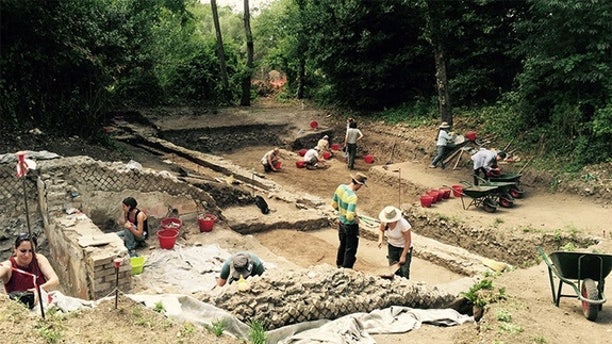 Archaeologists working at a villa built by the Roman Emperor Hadrian (reign A.D. 117-138) have discovered a building filled with art. (Kevin MacNichol)

A 1,900-year-old building that would have served as an apartment within the estate of Roman Emperor Hadrian has been discovered in Tivoli, Italy. The building is full of lavish artwork, archaeologists said.

"The exceptionally well-preserved decoration of the rooms includes mosaic floors with both vegetal and abstract patterns, marble revetments [panels], wall paintings, and an almost entire ceiling fresco," the archaeologists wrote in the summary of a paper recently presented at the Archaeological Institute of America's annual meeting in San Francisco.

Much of the art is now in pieces, and the process of excavating and conserving it is a difficult one, said Francesco de Angelis, a professor of art history and archaeology at Columbia University in New York, who is directing the team's work. [See Photos of Building and Artwork at Hadrian's Villa]

"It's like a puzzle, we have all the pieces, we just have to put them together, and of course get them cleaned [and] consolidated," de Angelistold Live Science.

The newly discovered building was likely used as an apartment by a high-ranking individual, but not someone who was part of the emperor's closest entourage, he said. Similar apartments have been found at the Roman city of Ostia.These apartments "are comfortable, they are lavish to some extent," but are not the houses of the wealthiest aristocrats, de Angelis said.

The team carried out a mix of techniques, including radar scans, to see beneath the ground at the site, finding that the apartment is part of a larger unexcavated complex within Hadrian's Villa. "The building we are excavating was not isolated. It was part of a broader group of structures," de Angelis said. From the radar scans, the complex appears "almost like a neighborhood within the villa," de Angelis said, although he added he won't know what the rest of the complex is like until it is excavated.

Hadrian's Villais located about 19 miles from Rome. In ancient times, it occupied about 300 acres of land, or almost twice the land area of the city of Pompeii (although Hadrian's Villa has many more open spaces). The villa contained numerous structures, including shrines, palaces, baths, libraries and gardens.

De Angelis said that Hadrian (reign A.D. 117-138) traveled extensively throughout the Roman Empire, and there would have been long intervals during which he was not living in the villa. After Hadrian died, his successors also used the villa when their schedules allowed, de Angelis said.

"The real inhabitants of the villa, if you want, were the personnel and staff members that were there and maintained it, kept it clean and prepared it for the emperor when he came," said de Angelis,noting that archaeological evidence suggests that such staff occupied the villa continuously for several centuries. The team hopes to learn more about them in future field seasons.