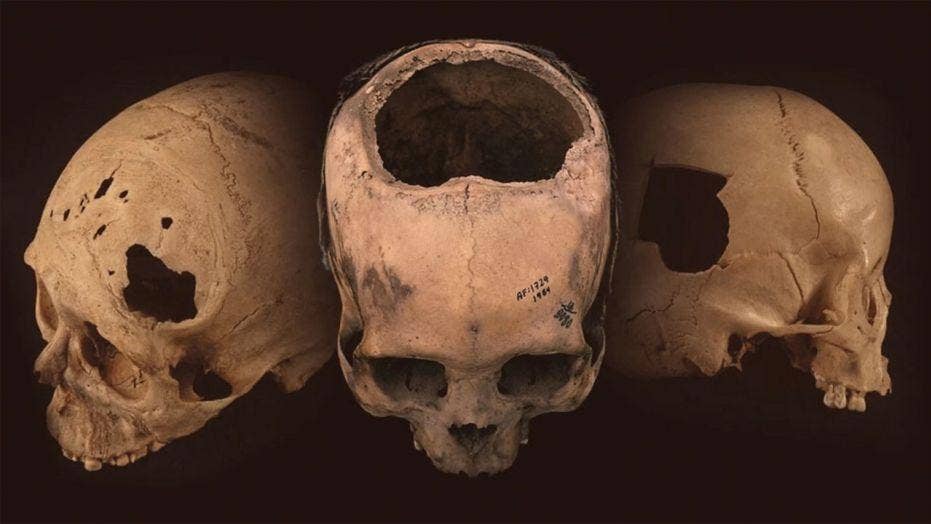 Incas mastered the practice of drilling holes in skulls

The Incas mastered the practice of trepanation, which is the process of drilling holes in people’s skulls.

A large fossilized skull discovered in China in 1933 may be a new species of ancient human, scientists said on Friday.

The Harbin cranium dates to at least 146,000 years old and a group of international researchers wrote in the journal The Innovation that phylogenetic analysis suggests it represents "a new sister lineage for Homo sapiens."

In a summary of one of three papers, the group wrote that the well-preserved artifact's massive size and large cranial capacity fall in the range of modern humans but is combined with "a mosaic of primitive and derived characters."

90% OF SHARKS MYSTERIOUSLY WIPED OUT NEARLY 20 MILLION YEARS AGO: RESEARCHERS

"It differs from all the other named Homo species by presenting a combination of features, such as long and low cranial vault, a wide and low face, large and almost square orbits, gently curved but massively developed supraorbital torus, flat and low cheekbones with a shallow canine fossa, and a shallow palate with thick alveolar bone supporting very large molars," the group said, noting that the skull "advances" human understanding of several other less-complete fossils from China in the late Middle Pleistocene that had been interpreted as local "evolutionary intermediates" between Homo erectus and Homo sapiens.

Upon closer examination, the scientists found that the Harbin cranium and other Middle Pleistocene Epoch human fossils from China formed a "third East Asian lineage, which is a part of the sister group of the H. sapiens lineage."

"Our analyses of such morphologically distinctive archaic human lineages from Asia, Europe, and Africa suggest that the diversification of the Homo genus may have had a much deeper timescale than previously presumed," they added. "Sympatric isolation of small populations combined with stochastic long-distance dispersals is the best fitting biogeographical model for interpreting the evolution of the Homo genus."

In additional commentary, the scientists suggested that one of the fossils they used called the Dali cranium – found in Shaanxi province and considered its own species, Homo daliensis – and another Hualongdong cranium should be referred to as Homo daliensis, the Harbin cranium's "clear diagnostic features" differ from the Dali and Hualongdong crania.

The Harbin cranium, they said, has a sister-group relationship with Gansu province's Denisovan Xiahe mandible.

"It is possible that both specimens belong to H. longi sp. nov. Further human fossils from the Middle Pleistocene of China and neighboring areas will test this idea," they pledged.

Denisovans, close relatives of Neanderthals, lived in Asia for hundreds of thousands of years, but scientists have only found small fossil traces of their existence. They are known to have interbred with Homo sapiens, as there were more than one species of hominin at the time.

An artist's impression of what Dragon Man could have looked like. (Natural History Museum/Chuang_Zhao)

Renderings of the Harbin cranium helped bring the male Homo longi, nicknamed "Dragon Man" -- after the Long Jiang, or Dragon River, in the Heilongjiang province – to life.

The man was around 50 years old when he died.

The skull was allegedly found in mysterious circumstances almost 90 years ago, when a Chinese laborer working on a bridge over the Songhua River pulled it out of nearby sediment, according to the London Natural History Museum (NHM).

The man kept the Harbin cranium well hidden until shortly before his death in 2018, after which his family relocated the skull and donated it to the Geoscience Museum, Hebei GEO University and lead study author professor Qiang Ji.

The South China Morning Post reported Friday that the man had hidden it in order to protect it from the Japanese army.

The cranium nicknamed Dragon Man, which could be a new species of ancient human. (Mr. Wei Gao)

In a lengthy statement posted to Twitter on Friday, NHM paleoanthropologist and co-author of two of the three Dragon Man papers, Christopher Stringer, wrote that he had been invited to join Qiang Ji in 2019 and marveled at the preservation of the Harbin cranium.

"The cranium is almost intact, but with only one huge second molar preserved, and it is massive in size, with an endocranial volume of ~1420 ml. It has a strong supraorbital torus and very broad upper face, nasal opening and palate, but in contrast the face is low in height with delicate cheekbones, and retracted under the cranial vault, more closely resembling Homo sapiens," he said.

"Nevertheless, the braincase is clearly archaic in profile - long, low and without the globular shape found in our species," Stringer continued. "However, the mastoid processes and large, and the back of the skull does not show the angulated occipital bone and strong transverse torus found in large H. heidelbergensis individuals. From the rear, the cranium is very broad and parallel-sided, lacking the upper parietal expansion found in H. sapiens and the almost spherical shape and suprainiac fossa found in most Neanderthals (Ni et al., 2021)."

Stringer pointed out that while palaeoanthropologists often use landmark-based analyses to measure overall similarities between compared human fossils, his colleagues' phylogenetic analyses employ mathematical techniques in order to establish branching diagrams of evolutionary relationships between species or organisms.

"These methods were applied to 95 representative fossils and over 600 metrical and morphological traits, and the analyses revealed 3 main clades of later Pleistocene humans: H. sapiens, H. neanderthalensis and a group containing Harbin and other Chinese fossils such as Dali, Jinniushan and Xiahe," he said.

In doing so, what was "surprising" to Stringer was that the Harbin clade – a grouping that includes a common ancestor and all the descendants of that ancestor – was first linked to Homo sapiens and not Homo neanderthalensis.

Stringer said while he believes the Harbin group warrants a distinct species name, he would "prefer to place the Harbin and Dali fossils together as H. daliensis" and considers the Harbin cranium as a "possible Denisovan."

"But these differences of opinion should not deflect from a remarkable new piece in the jigsaw of human evolution, a fossil that will continue to add important information for many years to come," he concluded.