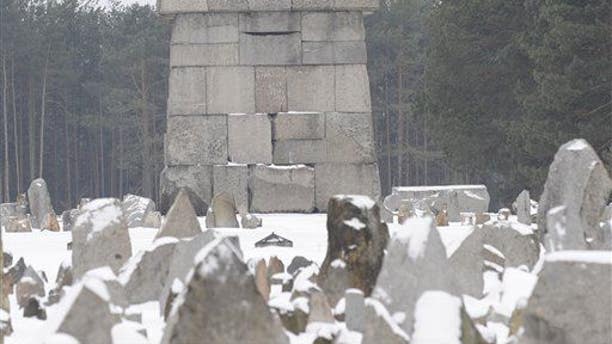 A memorial on the grounds of the Nazi death camp in Treblinka, Poland. (AP Photo/Alik Keplicz)

The Nazis tore down their notorious Treblinka death camp in 1943 and did their best to hide any physical evidence it ever existed. The strategy mostly worked, but some high-tech archeology is finally revealing the camp's secrets, reports LiveScience.

British archeologist Caroline Sturdy Colls led a team that conducted the first digs at the site in Poland—Treblinka was actually two separate camps—discovering three previously unidentified mass graves and the apparent location of one of the camp's two gas chambers.

They found the latter by scanning the ground with lasers to reveal a brick wall and foundation, and Colls says the gas chambers were the camp's only brick buildings.

Nearby, the team found tiles stamped with the Star of David, which meshes with eyewitness accounts that the gas chambers were set up to look like bathhouses.

"Treblinka had never been looked at since the period after the war," says Colls. "And everybody had assumed that because the history books said it was destroyed, it was." Her team re-interred any remains they found after consulting with Poland's chief rabbi, "and it was heartwarming to see the reverence with which they treated" them, writes Curt Schleier at the Jewish Daily Forward.

He got an early look at a show about the findings that airs at 8 Eastern tonight on the Smithsonian Channel. Treblinka: Hitler's Killing Machine is important and "worth watching," he writes, especially as the number of Holocaust survivors dwindles.

David Hinckley at the Daily News agrees, though he was a little put off by the reality-show feel of its presentation. (Click to read about the recent arrest of a 93-year-old who worked at Auschwitz.)