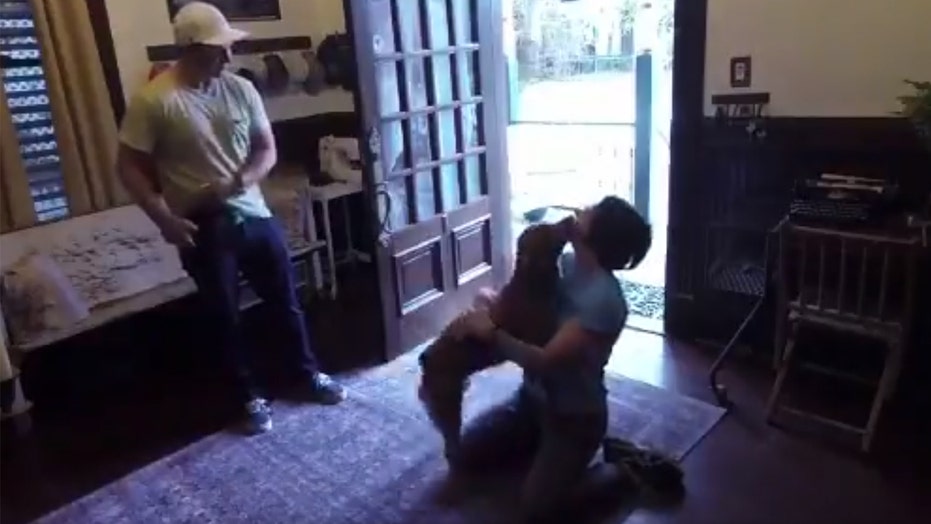 NASA astronaut shares heartwarming video of reunion with her dog

Raw video: Christina Koch's dog is over the moon in reunion with astronaut owner after nearly a year apart.

NASA astronaut Christina Koch recently returned to Earth after a record-breaking 328-day stint on the International Space Station. Feted for her achievement, she also received a hero’s welcome from her delighted dog when she returned home.

“Not sure who was more excited. Glad she remembers me after a year!” Koch posted to social media, along with a video of her dog, LBD, going wild as the astronaut returned home to Galveston.

The video has racked up 3.7 million views since it was posted on Feb. 13.

Koch’s nearly 11 months in orbit set a record for the longest spaceflight by a woman.

Earlier this week, Koch told Fox News’ Bill Hemmer that boredom was never a problem during her stint on the ISS.

“I wish I had enough time on there to get bored, but not all,” she explained, during her first live TV interview since returning to Earth on Thursday.

When not busy performing experiments, Koch explained that she “soaked up the unique atmosphere” of the floating space lab by taking pictures and spending time with her crewmates. “Boredom was not a problem at all,” she added.

The mission gave researchers the opportunity to observe the effects of long-duration spaceflight on a woman. The study is important because NASA plans to return to the moon under the Artemis program and prepare for the human exploration of Mars.

Koch told Fox News that seeing Earth from the International Space Station “brought perspective,” adding that she was able to really enjoy the planet’s beauty in sunrises and night passes.

“It helped me see that all humans are inherently the same,” she said.

In October 2019, Koch and fellow NASA astronaut Jessica Meir made history with the first all-female spacewalk.

The astronauts were just under five hours into their spacewalk to replace a battery charger on the ISS when President Trump called to congratulate them on their “brilliant” achievement.