Bizarre stunted galaxy found in our own cosmic backyard 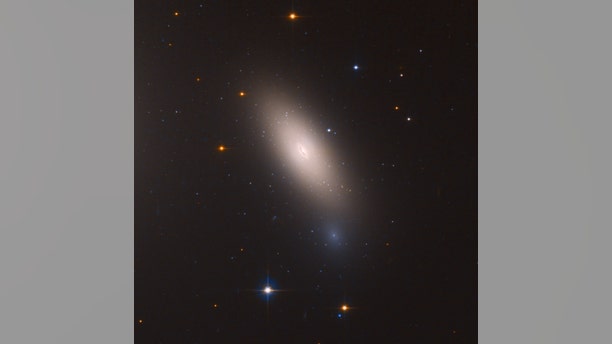 This Hubble Space Telescope image shows the galaxy NGC 1277, which is unique in that it is considered a relic of what galaxies were like in the early universe. NGC 1277 is composed exclusively of aging stars that were born 10 billion years ago. (M. Beasley(Instituto de Astrofisica de Canarias)/NASA/ESA)

Astronomers are hunting down the cause of a nearby galaxy's "arrested development" with the help of NASA's Hubble Space Telescope.

The odd galaxy, called NGC 1277, doesn't appear to have evolved much in the past 10 billion years, a new study reports. Learning about its history should shed light on galaxy formation and evolution in general, study team members said.

NGC 1277, which is located about 240 million light-years away from Earth, is called a "red and dead" galaxy because it doesn't have enough fuel to produce new stars. That wasn't always the case, however. Shortly after the galaxy was formed, it produced stars 1,000 times faster than they are formed today in our Milky Way, the researchers said. [Gallery: 65 All-Time Great Galaxy Hits]

Astronomers think the key to NGC 1277's development lies in its globular clusters, which are groups of stars. Large galaxies typically have two types of clusters: metal poor, which appear blue, and metal rich, which appear red. (In astronomical parlance, a metal is any element on the periodic table that's heavier than helium.) Early in a typical galaxy's history, it should have a lot of red clusters; researchers think the blue clusters form later, after smaller satellites are absorbed into the center of the galaxy.

The Milky Way has roughly equal numbers of red and blue globular clusters, in part because our galaxy eats up galactic neighbors that get too close. But in NGC 1277, there are almost no blue globular clusters at all, the new study reports. This suggests the galaxy stopped growing because it didn't eat up nearby galaxies — a process that spurs star formation because of the new reservoirs of gas and dust that are available to it after such events.

"I've been studying globular clusters in galaxies for a long time, and this is the first time I've ever seen this," study lead author Michael Beasley, an astronomer at the Instituto de Astrofísica de Canarias (IAC) at the University of La Laguna in Spain, said in a statement.

NGC 1277 might be moving too fast to eat, the researchers added. It's speeding through the Perseus cluster of galaxies at about 2 million mph (3.2 million km/h), which may not allow it to pick up gas for new star formation. The Perseus galaxy cluster also has a punishing environment near the center; the intergalactic gas there is too hot to coalesce for star formation, study team members said.

NGC 1277's shape is also a source of mystery. NGC 1277 has twice as many stars as the Milky Way, but it's just one-quarter the size of our galaxy. To researchers, the shape of NGC 1277 suggests that perhaps all galaxies, including the Milky Way, started as small, stunted collections of stars. It was only after accreting more material that galaxies grew into spirals and the other shapes that we see in the sky today.

NGC 1277 isn't the only "red and dead" galaxy out there; Hubble spotted several of these in the early universe. (In fact, astronomers suggest that 1 in 1,000 massive galaxies in the universe should look like NGC 1277.) The other galaxies, however, are too far away to see clearly. But NGC 1277's relative proximity allows astronomers to see greater detail, enabling more insights into its composition and history.

"We can explore such original galaxies in full detail and probe the conditions of the early universe," study co-author Ignacio Trujillo, who is also an astronomer at the IAC, said in the same statement.

Astronomers cottoned on to NGC 1277's unique history because of its central black hole, which is much more massive than expected for a galaxy of that size. Some astronomers suggest that young galaxies and black holes grow together; in the case of NGC 1277, the black hole may be overly massive (compared to those of other galaxies) because the galaxy's growth suffered from the lack of new stars.

The study team has used the Sloan Digital Sky Survey to identify another 10 candidate "arrested development" galaxies. As for NGC 1277, team members hope to use NASA's forthcoming James Webb Space Telescope (which launches in 2019) to look at how globular clusters move within NGC 1277. The clusters' movements will provide more information on dark matter — mysterious stuff that doesn't emit or absorb light, but which makes up most of the mass of the universe.

The results were published in the March 12 issue of the journal Nature.