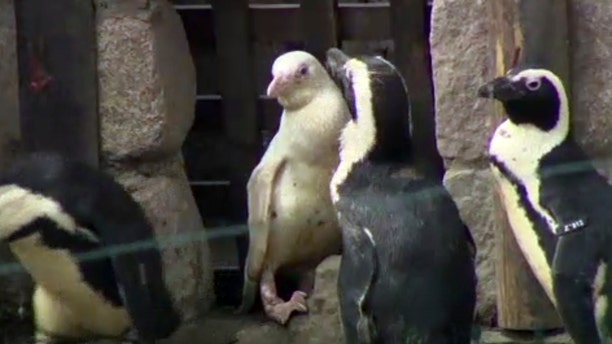 In this image made from video, an albino penguin is seen along in its enclosure in Gdansk zoo, Gdansk, Poland, Friday, March 22, 2019.  (AP Photo)

A century-long cover-up of the "depraved" sex acts of penguins has been uncovered in a new book.

He wrote a manuscript following months of research while accompanying doomed explorer Robert Scott on his famous 1910-1913 expedition to the South Pole.

Dr. Levick's subsequent cover-up of his discoveries is the subject of the new book 'A Polar Affair'.

It describes how Dr. Levick deemed his research too inappropriate to ever be published.

Among other sexual behaviors of "astonishing depravity", Dr. Levick noted that "promiscuity" and "infidelity" was rife among the colony of Adélie penguins he studied.

But that was far from the worst of it.

Rape, gang rape and the sexual and physical abuse of chicks by adults were all recorded by the Nottingham-born scientist.

Necrophilia was also commonplace, with offenders often mating with birds who had died the previous year.

Some penguins even engaged in "prostitution", with males using stones to pimp out females.

It may sound a bit far-fetched, but the behavior was confirmed by scientists in a separate study of Adélie penguins in 1998.

Some prostituted penguins have even been shown to trick males into thinking they would have sex by performing an elaborate courtship ritual, then run away with their stones.

He was so shocked that he wrote down his observations in Greek so only educated gentlemen could understand it.

It was deemed too shocking for the general public and only circulated among a small group of experts.

Scientists had to wait another 50 years before the remarkable sexual antics of the Adélie were revealed.

The work was buried so well, in fact, that it resurfaced when it was unearthed at the Natural History Museum in 2012.

A Polar Affair was written by Lloyd Spencer Davis, aka the "Professor Penguin", who's regarded as a world authority on penguins.

The award-winning film-maker and author is the director of the Centre for Science Communication at Otago University in New Zealand.

Davis had thought he was the first to record gay relationships among Antarctic penguins in 1996, until he read Dr. Levick's paper.

It turns out same-sex romps were rampant among the Adélie penguins studied by Dr. Levick 80 years earlier, meaning Davis had been beaten to the punch.

A Polar Affair is available now on Amazon.