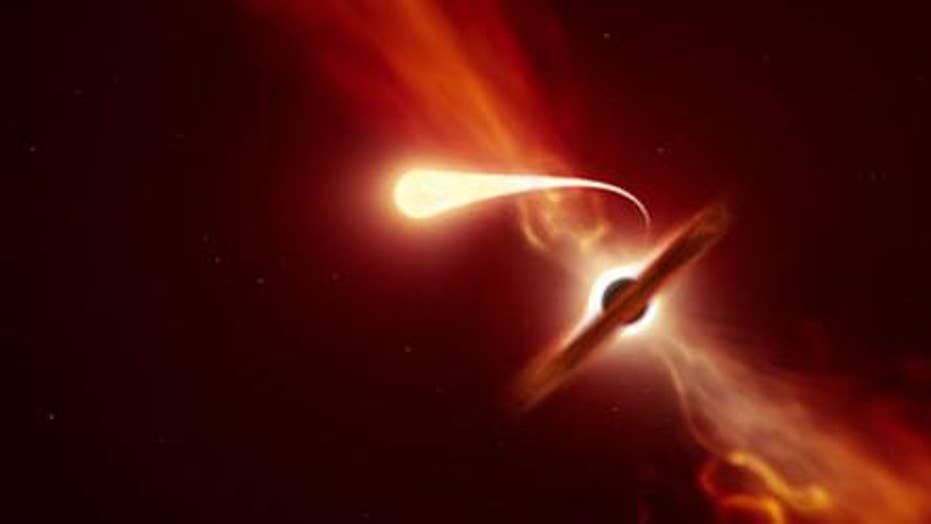 Astronomers have discovered a black hole in deep space that ripped apart a star millions of light-years from Earth.

The process, known as "spaghettification," saw the black hole create a blast of light seen 215 million light-years from Earth, the "closest such flare recorded to date," the researchers said in a statement. A light-year, which measures distance in space, is approximately 6 trillion miles.

"The idea of a black hole 'sucking in' a nearby star sounds like science fiction," Matt Nicholl, the study's lead author and Royal Astronomical Society research fellow at the University of Birmingham, UK, said in the statement. "But this is exactly what happens in a tidal disruption event."

This illustration depicts a star (in the foreground) experiencing spaghettification as it's sucked in by a supermassive black hole (in the background) during a 'tidal disruption event.' In a new study, done with the help of ESO's Very Large Telescope and ESO's New Technology Telescope, a team of astronomers found that when a black hole devours a star, it can launch a powerful blast of material outwards. Credit: ESO/M. Kornmesser

WHAT'S INSIDE A BLACK HOLE?

A tidal disruption event occurs when a star gets too close to a black hole. The gravity of the black hole is so intense it will stretch and contort any object that gets near it, akin to a piece of spaghetti.

The blast of light was caught by several telescopes around the world, prompting scientists to look into the anomaly for months to make sure their initial observations were correct.

"A tidal disruption event results from the destruction of a star that strays too close to a supermassive black hole," study co-author and astronomer at the Harvard-Smithsonian Center for Astrophysics Edo Berger added. "In this case the star was torn apart with about half of its mass feeding—or accreting—into a black hole of one million times the mass of the Sun, and the other half was ejected outward."

Finding these events (this one is known as AT2019qiz) is incredibly rare, but it was easier to analyze because it was discovered so early, Kate Alexander, NASA Einstein Fellow at Northwestern University, pointed out.

"This is a unique 'peek behind the curtain' that provided the first opportunity to pinpoint the origin of the obscuring material and follow in real time how it engulfs the black hole," Alexander explained.

"AT2019qiz is the nearest tidal disruption event discovered to date, and hence, incredibly well-observed across the electromagnetic spectrum," Berger added. "This is the first case in which we see direct evidence for outflowing gas during the disruption and accretion process that explains both the optical and radio emissions we've seen in the past. Until now, the nature of these emissions has been heavily debated, but here we see that the two regimes are connected through a single process. This event is teaching us about the detailed physical processes of accretion and mass ejection from supermassive black holes."

The research was published in Monthly Notices of the Royal Astronomical Society.

In January, astronomers spotted four "strange" objects orbiting the massive black hole at the center of the Milky Way galaxy, known as Sagittarius A*.

In May 2019, astronomers observed the sudden brightening of Sagittarius A*, suggesting it may have come in contact with another celestial object. Also known as Sgr A,* it has a mass 4 million times that of the sun and is 25,000 light-years from Earth.

In October 2018, astronomers observed Sgr A* pulling gas blobs into its vortex at 30 percent of the speed of light.

In April 2019, scientists released the first-ever image of a black hole, spotted in a galaxy  55 million light-years from Earth.