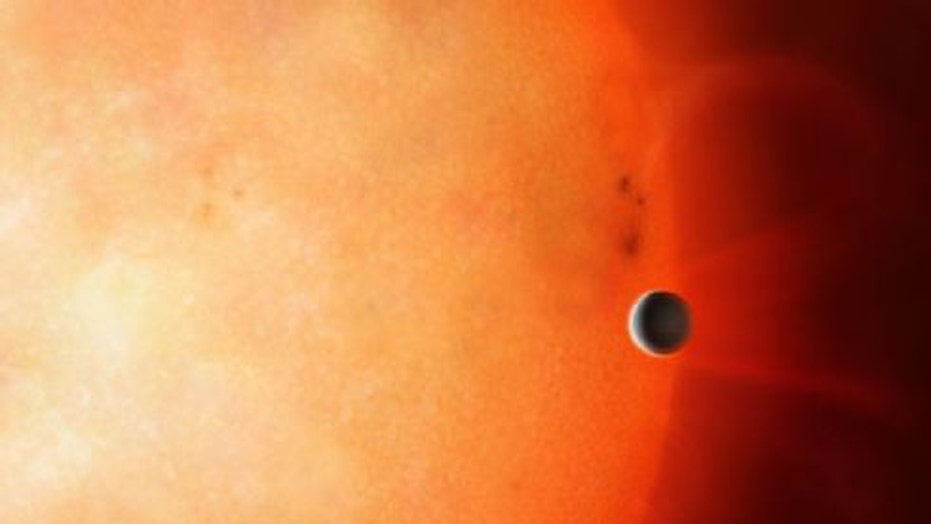 Experts have been intensely watching an exoplanet that is so close to its star, it may well be on the "edge of destruction."

Known as NGTS-10b, this planet is a "hot Jupiter," a gas giant that orbits its star very closely. So far, approximately 400 exoplanets have met the "hot Jupiter" definition, but this particular one has a year that only lasts 18 hours, making it "perilously close" to its star.

“Although in theory hot Jupiters with short orbital periods (less than 24 hours) are the easiest to detect due to their large size and frequent transits, they have proven to be extremely rare," the study's lead author, James McCormac, said in a statement. "Of the hundreds of hot Jupiters currently known there are only seven that have an orbital period of less than one day.”

Artist’s impression of a hot Jupiter orbiting close to a star. (Credit: University of Warwick/Mark Garlick)

ALIEN PLANET IS SO HOT IT'S TEARING ITSELF APART

The 18-hour orbit of NGTS-10b is the shortest discovered for a "hot Jupiter" to date.

NGTS-10b, which is believed to be roughly 10 billion years old, is not in the habitable zone —  an area that could allow for liquid water to be on the surface.—  and is 1,000 light-years from Earth. One light-year is the equivalent of 6 trillion miles.

The planet is likely tidally locked (one side of it always faces the star), meaning astronomers estimate its average temperature to be more than 1,000 degrees Celsius or 1,832 degrees Fahrenheit. NGTS-10b is believed to be 20 percent larger than Jupiter itself and more than twice its mass. It's also believed that the star, NGTS-10, is 1,000 degrees cooler than the sun and is roughly 10 billion years old as well.

Planets of this size with exceptionally short orbits are believed to eventually tear themselves apart, the study's co-author, David Brown said, with another co-author, Daniel Bayliss, adding it could happen in the next decade.

“Over the next 10 years, it might be possible to see this planet spiraling in," Bayliss said. "We’ll be able to use NGTS to monitor this over a decade. If we could see the orbital period start to decrease and the planet start to spiral in, that would tell us a lot about the structure of the planet that we don’t know yet."

"Either we are seeing it in the last stages of its life, or somehow it’s able to live here longer than it should," Bayliss added.

The research was published in the scientific journal Monthly Notices of the Royal Astronomical Society.

Earlier this month, another "hot Jupiter," KELT-9b, was discovered. The planet has such extreme temperatures that it tears apart its hydrogen gas molecules on the dayside part of the planet, only to reform once they move around to the nightside part, NASA said.