A tiny species that looks part-deer, part-mouse was missing for nearly 30 years. Scientists just found it. 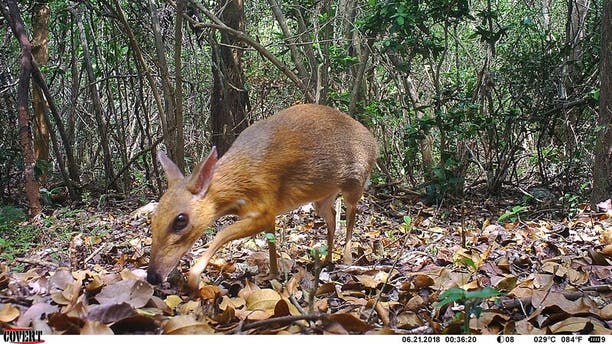 A silver-backed chevrotain was caught on a camera trap as it wandered about the forest. (Credit: Originally published on Live Science.)

A tiny creature that looks part-deer, part-mouse hadn't been seen in nearly 30 years. Now, with a series of camera traps, researchers have caught the silver-backed chevrotain, also called the Vietnam mouse-deer, meandering about its tree-filled home.

With the distinguishing silver line down its back that starts just behind its shoulders, the silver-backed chevrotain (Tragulus versicolor) looks a bit like a deer, but it's the size of a large house cat. The species is thought to be endemic to Vietnam and was first described in the early 20th century and again in 1990. Since then, the silver-backed chevrotain had been "missing."

"There was no reason to think that it was extinct, but at the same time, we didn't know that it wasn't extinct," said Andrew Tilker, an officer of Asian species at Global Wildlife Conservation and a doctoral student at the Leibniz Institute for Zoo and Wildlife Research in Berlin. "No scientist or naturalist had any idea whether it was still out there," added Tilker, who was a senior author of a new study describing the findings.

Nguyen and his team traveled around Vietnam and spoke with villagers and forest rangers who reported having seen animals similar to the silver-backed chevrotain roaming about the tropical forests of the Greater Annamites, a region in Vietnam and Laos known for its high concentration of endemic species.

The team had a hunch that some of these sightings might have indeed been the silver-backed chevrotain, so they attached motion-activated camera traps to trees in the areas described by the locals.

The researchers aren't certain how many individuals these images represent or whether this population is endangered.

The Greater Annamites region "has incredible biodiversity, a very high concentration of endemic species recently discovered by science, and we know very little about them," Tilker said. But, similar to the rest of Vietnam, the region is threatened by habitat loss and illegal poaching with wire snares, he added.

"We don't know if the silver-backed chevrotain is endangered by snaring pressure because we don't have enough information, but this is in the back of our minds as a probable threat … just because snaring is so widespread," Tilker said. So now, the team hopes to figure out, through more surveys, if the species' population is stable or threatened, and if the silver-backed chevrotain is found in other parts of Vietnam.

"We want to understand how threatened the silver-backed chevrotain is and to develop evidence-based conservation strategies to protect it," Tilker said. "If we don't implement conservation efforts to protect this species now, the next time the species disappears, we might not find it again."

The findings were published today (Nov. 11) in the journal Nature Ecology & Evolution.