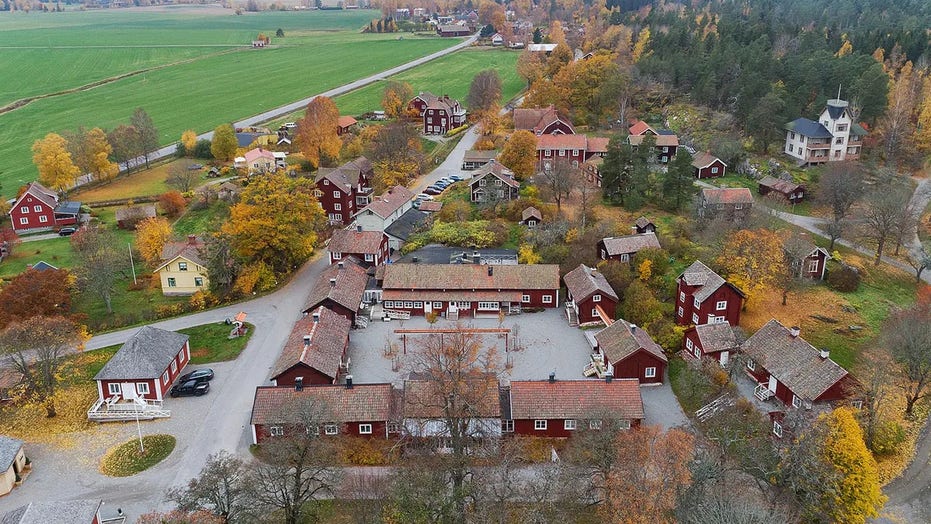 Why buy a villa when you can buy a whole village?

That’s the question nearly no one is asking themselves, aside from maybe a few super-rich Scandinavian billionaires, now that the entire hamlet of Sätra Brunn in Sweden is listed with Christie's International for the unbeatable price of just under $7.3 million.

WOMAN CONSIDERS DIVORCING HUSBAND AFTER IN-LAWS MOVE IN NEXT DOOR

Sätra Brunn, which today is regarded as a spa and wellness destination located within the municipality of Sala, was first established in 1700 when a doctor purchased the land surrounding a source of pure spring water, according to the village’s official website. After setting up housing, a bathhouse, a church, a hospital and some “tree-lined avenues,” he sold the grounds in 1740 to a bishop who later bequeathed it to the Uppsala Academy, who retained ownership through the middle of the 20th century, per the town’s Christie’s International listing.

During that time, the village had served as a retreat for “aristocrats as well as commoners,” as well as a “recreational environment for those who are not well.” And although the village still closes for part of the year in the winter, Sätra Brunn and its built-in business opportunities are said to be “alive and well,” per Christie’s International, via the ownership group that currently holds the deeds.

Today, the grounds include a number of homes (some of which are insulated), along with a bathhouse/spa, a restaurant/hotel, a “fully operational preschool” and a “local beverage production site” on its 58 hectares, 34 of which are said to be located within a separate forested site. Sätra Brunn’s website also indicates that it frequently hosts retreats, weddings and conferences.

Oh, and one of the buildings has been newly painted, too. Just in case you were on the fence about buying.

Sätra Brunn will be auctioned off via a bidding process, with interested parties instructed to submit their offers before May 31. The price is currently listed at 70,000,000 Swedish kroner, or $7,277,188.

The grounds include a spa and bathhouse, in addition to homes, a preschool, a restaurant/hotel and an operational beverage production site. (Christie’s International Real Estate)

A representative for Christie’s International was not immediately available to confirm interest in the property.