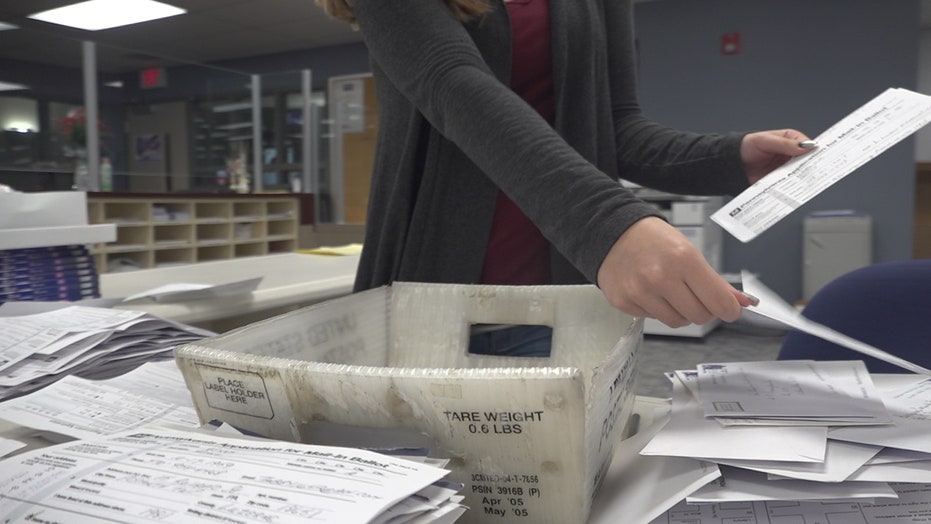 Some municipalities in Wisconsin have already exceeded 50% of all the ballots cast in the last presidential election, even as early voting just got underway on Tuesday.

The city of Middleton, near Madison, reached roughly 60% of its 2016 turnout, while Bayside, Shorewood and Whitefish Bay in Milwaukee County, as well as Fitchburg, Verona and Waunakee in Dane County have all passed the 50% threshold as compared to previous years, the Milwaukee Journal Sentinel reported.

An influx of absentee ballots, particularly in Milwaukee and Madison -- which historically lean blue -- arrived even before the 11-day early voting period began and is considered largely responsible for the high voter tally two weeks before Election Day.

$6.3M FOR ELECTIONS FROM ZUCKERBERG, BIG TECH POUR INTO WISCONSIN DESPITE CONSERVATIVE PUSHBACK

As of Tuesday, more than 915,000 voters had returned absentee ballots. That is 30% of the total votes cast in the 2016 presidential election.

Since early voting is technically considered absentee voting -- even though voters appear in person at their polling sites in their municipalities -- the ballots cast won't be opened and counted until Election Day.

Voters braced for long wait times Tuesday, expecting a repeat from state primaries earlier this year that was further complicated by the coronavirus pandemic.

Despite the state reporting 4,591 new cases of COVID-19 on Tuesday, voters, donning masks and socially distancing, flocked to polling stations in Green Bay, Stevens Point, De Pere and other cities across the state to cast their ballots.

In Green Bay, some voters said they waited up to three hours to vote, while in Oshkosh wait times were estimated around an hour to an hour and a half.

“We tried to tell citizens ahead of time that we felt Tuesday was going to be a busy day because it’s the first day and everyone wants to make sure that their vote is in and counts,” Neenah's deputy city attorney, Adam Westbrook said Tuesday morning, according to reports by the Green Bay Press-Gazette. “We’re hoping that, after today, it will be more of a steady stream as opposed to a line. It’s just hard to get this caught up because we only have two workers inside.”

In Neenah, Matt Gunter said he started waiting outside city hall from 7:30 a.m. in a line that was over a block long.

“There’s something powerful about doing it in person,” he told the Gazette. “I decided to come early because I don’t have any idea how crazy it’s going to be on the third [of November]. The line is long enough this morning, but it’s actually encouraging to see folks out and voting.”

Locations and times to vote Tuesday varied across the state, but lines were reported in Milwaukee, Madison, Green Bay, Kenosha and Sheboygan. Voters can also drop off completed absentee ballots at locations around the state, including in specially installed drop boxes in some larger cities.

MASKLESS CALIFORNIANS WILL BE ALLOWED TO VOTE AT POLLS, OFFICIALS SAY

“I took about 10 minutes and I was in and out,” first-time early voter Stuart Check, a 31-year-old attorney from Milwaukee, said, according to the Associated Press. “I’ll probably vote early from now on because it’s so easy.”

Both President Trump and Democratic nominee Joe Biden have attempted to appeal to voters in Wisconsin in the days leading up to early voting.

Trump, who narrowly won the state in 2016 by less than a percentage point, held a rally in Janesville on Saturday despite warnings from health officials that large gatherings during the height of a COVID-19 outbreak in the state could be unsafe.

Meanwhile, Biden encouraged voters to cast their ballots early if they could.

“You can be one of the first to move our country forward,” he said.