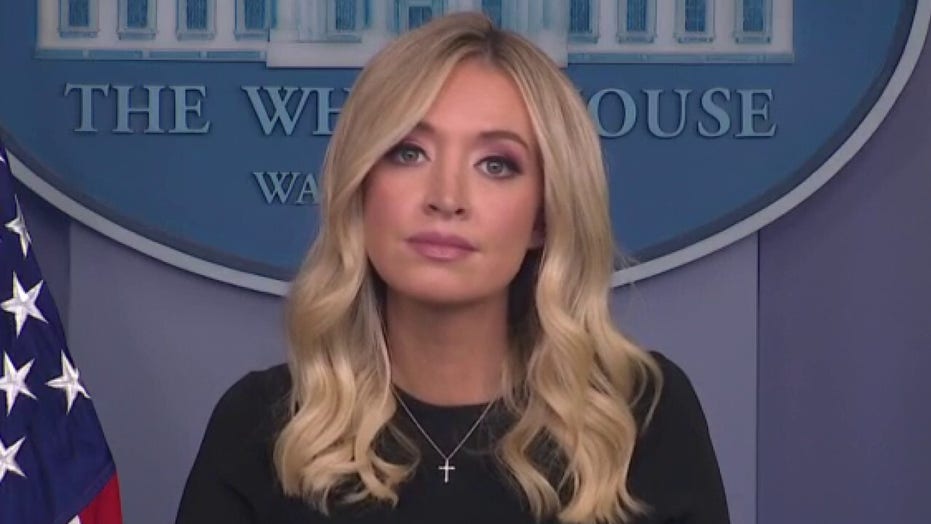 McEnany: John Brennan has the most to answer for

White House press secretary Kayleigh McEnany said that former CIA Director John Brennan has “the most to answer” of any Obama administration official when it comes to the origins of the Russia investigation.

McEnany said that of all the “bad actors” of the Obama White House, Brennan “has the most to answer” for because he testified before Congress that the so-called Christopher Steele dossier, “paid for by Hillary Clinton, paid for by the DNC,” had no part in the opening of the Russia investigation.

“In fact, we know it did, in fact we know it was the impetus and testified before a FISA court for its truthfulness to spy on the Trump campaign,” the press secretary continued. “So too does Samantha Power and Susan Rice and these individuals who admitted under oath that they spoke to foreign leaders and representatives of foreign leaders during their transition, yet somehow during the Trump transition that was uncalled for.”

Former acting FBI Director Andrew McCabe admitted in 2017 testimony released in May that the FBI was unable to “prove the accuracy" of the Steele dossier, though it was used to surveil Trump officials.

Brennan was one of a number of Obama-era officials revealed to have sought the “unmasking” of Michael Flynn in his conversation with Russian Ambassador Sergey Kislyak, which led to a criminal case against Flynn, who pled guilty to lying to the FBI about the phone call. The case against the former national security adviser was later dropped by the Justice Department after newly revealed documents raised concerns about the handling of his FBI interview. (The judge in the case has yet to rule on the motion).

BRENNAN, WHO SOUGHT TO UNMASK FLYNN, CLAIMS RELEASE OF NAMES IS 'ABOMINABLE ABUSE OF AUTHORITY'

The declassified “unmasking” list specifically showed officials who “may have received Lt. Gen Flynn’s identity in response to a request processed between 8 November 2016 and 31 January 2017 to unmask an identity that had been generically referred to in an NSA foreign intelligence report,” the document, obtained by Fox News, read.

U.S. Attorney John Durham is investigating the origins of the FBI’s original Russia probe, and there is speculation that he is taking particular interest in the Russian interference findings. Brennan has said he has nothing to hide and would be willing to be interviewed by Durham.

“I feel very good that my tenure at CIA and my time at the White House during the Obama administration ... that I was not engaged in any type of wrongdoing or activities that cause me to worry about what this investigation may uncover,” Brennan said on May 18. “So, I welcome the opportunity to talk with the investigators.”

He called the recent actions by the Department of Justice to drop the case against Flynn combined with the release of names “blatant political corruption at the highest levels of U.S. government.”

Upon the conclusion of the probe by Special Counsel Robert Mueller, which found no criminal wrongdoing by the president, Brennan admitted he may have received “bad information” on any possible connections between the Trump campaign and Russia.

BRENNAN SAYS HE'S WILLING TO BE INTERVIEWED BY DURHAM

“I am relieved that it’s been determined there was not a criminal conspiracy with the Russian government over our election.”

Brennan has repeatedly said, including in 2017 congressional testimony, that the CIA did not rely on the dossier when deciding to investigate the connection of Trump officials and Russian agents, but it has since been revealed that the FBI relied on Steele's now-discredited dossier to obtain a surveillance warrant to spy on former Donald Trump aide Carter Page, in which FBI officials asserted that Page was an "agent" of Russia.

It has emerged since Flynn's guilty plea that the FBI officials who interviewed him, anti-Trump agent Peter Strzok and "SSA [Supervisory Special Agent] 1," have each separately been implicated by Inspector General Michael Horowitz in apparent misconduct and mismanagement in both the Flynn case and the Carter Page matter.