The White House clarified a number of statements President Biden made during a live town hall Thursday night, walking back his vow to call in the National Guard to aid the congested supply chain and his suggestion that the United States would defend Taiwan from a potential attack from China.

The White House told Fox News on Friday that "requesting the use of the national guard at the state level is under the purview of Governors."

AFTER BIDEN SAYS US WOULD DEFEND TAIWAN FROM ATTACK, CHINA SAYS THERE'S 'NO ROOM FOR COMPROMISE'

"We are not actively pursuing the use of the national guard on a federal level," a White House official told Fox News.

The clarification came after the president, during a CNN town hall hosted by Anderson Cooper Thursday night, was asked if he would consider having National Guardsmen drive trucks to make up for the lack of truck drivers amid the fallout from the coronavirus pandemic.

Biden said he would, and that he had a timetable to solve the crisis.

"I had a timetable for, first of all, I want to get the ports up and running," the president said, noting the commitments he had from Walmart and other companies, like UPS and FedEx, to run 24/7 operations to help quell the congested supply chain.

When pressed further on whether he would want the National Guard to drive trucks, the president replied: "The answer is yes, if we can't move to increase the number of truckers, which we're in the process of doing."

Shifting to foreign policy, the president was asked by a member of the audience about China’s recent testing of a hypersonic missile and questioned him about whether the United States would defend Taiwan in the wake of an attack from Beijing.

Biden added that he does "not want a Cold War with China."

Cooper chimed in, pressing again on whether the U.S. would defend Taiwan from a Chinese attack, to which Biden replied: "Yes, we have a commitment to do that."

By Friday morning, a Chinese foreign ministry spokesperson responded to the comment via the Chinese state-affiliated Global Times.

"No one should underestimate the strong resolve, determination and capability of the Chinese people to safeguard national sovereignty and territorial integrity," the spokesperson said, according to the mouthpiece for the brutal communist regime. "China has no room for compromise."

The Global Times added that China's foreign ministry told the U.S. to "be cautious in words and deeds" and to "refrain from sending any wrong signal to secessionists."

But a White House spokesperson on Friday told Fox News that the president "was not announcing any change in our policy."

"There is no change in our policy," the spokesperson told Fox News. "The U.S. defense relationship with Taiwan is guided by the Taiwan Relations Act."

The Taiwan Relations Act to which the United States is a party does not guarantee the U.S. will engage militarily if China attacks Taiwan, which it has claimed for decades is sovereign Chinese territory, but states that the United States "will make available to Taiwan such defense articles and defense services in such quantity as may be necessary to enable Taiwan to maintain self-sufficient defense capabilities." 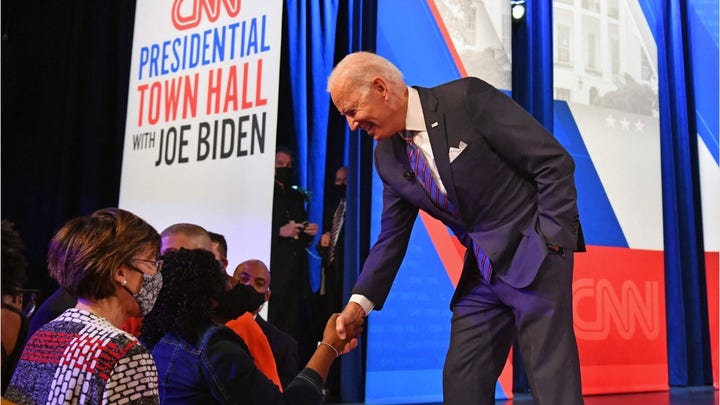 U.S. presidents have pursued a policy of "strategic ambiguity" so that China would not know exactly what the U.S. response would be to an attack.

Beijing views Taiwan as a breakaway province and claims that it is part of its own territory. The two countries split in 1949, and China has been increasing pressure on the self-ruled nation while opposing its involvement in international organizations such as the United Nations. The U.S. does not formally recognize Taiwan but maintains an unofficial relationship and is supportive of its democratic government.

The Biden administration has aimed to compartmentalize its relationship with China – competing in some respects while seeking cooperation on other issues, like climate change. But it has made clear for months that the United States will defend Taiwan, which is a democratic island off the coast of China.

"We have an abiding interest in peace and stability across the Taiwan Strait. We consider this central to the security and stability of the broader Indo-Pacific region," a senior administration official told Fox News in August as China aimed to seize on the Afghanistan withdrawal to intimidate Taiwan.

"We will uphold our commitment under [Taiwan Relations Act], we will continue support Taiwan’s self-defense, and we will continue to oppose any unilateral changes to the status quo," the official said.