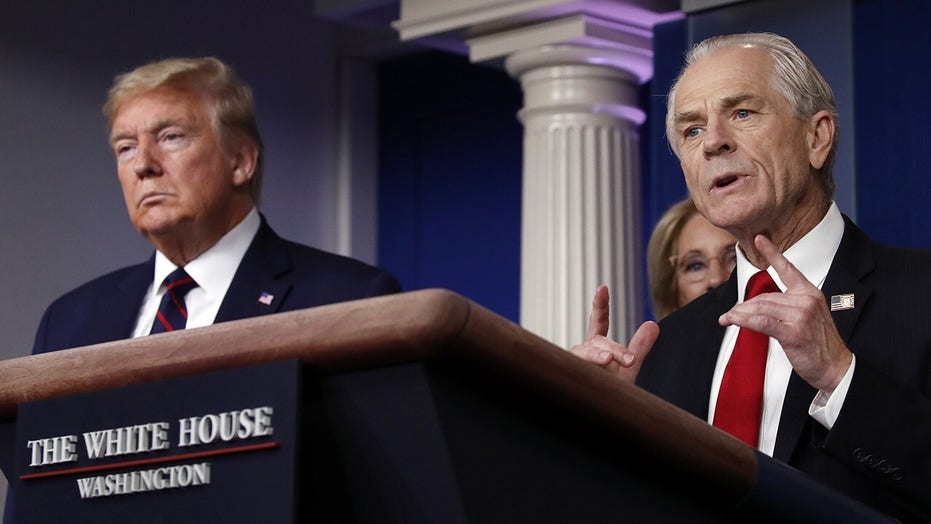 Top White House trade adviser Peter Navarro warned in stark terms about how deadly and economically devastating the coronavirus outbreak could be, weeks before it became a full-blown pandemic.

Navarro delivered the warnings to others at the White House in internal memos in January and February, saying that the United States could see up to 2 million deaths and trillions of dollars in economic damage.

The first Navarro memo was dated Jan. 29 and was addressed to the White House National Security Council, according to The New York Times, which first reported on the document. In it, Navarro made his case for an “immediate travel ban on China.”

In that memo, Navarro also reportedly warned that “the lack of immune protection or an existing cure or vaccine would leave Americans defenseless in the case of a full-blown coronavirus outbreak on U.S. soil.”

“This lack of protection elevates the risk of the coronavirus evolving into a full-blown pandemic, imperiling the lives of millions of Americans,” Navarro wrote in the memo, according to the Times.

Navarro’s first memo came as the president was downplaying the prospect of the virus coming to the U.S., while, at the same time, just days later on Jan. 31 restricting travel from China, after it was reported that COVID-19 was first discovered in China in December 2019 in Wuhan, Hubei province.

The memo reportedly warned of up to $5.7 trillion in economic costs and up to a half-million American deaths in a worst-case scenario.

In late February Navarro penned another memo, this time addressed to the president himself and escalating the warnings.

The Feb. 23 memo, first reported by Axios and confirmed by Fox News, warned that “there is an increasing probability of a full-blown COVID-19 pandemic that could infect as many as 100 million Americans, with a loss of life as many as 1-2 million souls.”

The estimate was ultimately in line with what officials say could have happened without any social distancing measures and other precautions now in place across the country.

National Institute of Allergy and Infectious Diseases director Dr. Anthony Fauci and Dr. Deborah Birx said last week that without any measures in place to mitigate the virus’ spread, projections jump to between 1.5 and 2.2 million deaths from COVID-19.

But with extensive restrictions in place, they said the coronavirus could still leave 100,000 to 240,000 people in the U.S. dead and millions infected.

In his memo, Navarro outlined such scenarios and called for funding to tackle the problem.

“To minimize economic and social disruptions and loss of life, there is an urgent need for an immediate supplemental appropriation of at least $30 billion dollars [sic] to support efforts at prevention, treatment, inoculation, and diagnostics,” Navarro wrote. “This is NOT a time for penny-pinching or horse trading on the Hill. Uncertainties associated with developing a vaccine and viable treatment options should NOT slow down investments in these high risk, high reward ventures.”

Navarro added: “In this Administration, we take appropriate risks to protect the public. We move in Trump Time to solve problems. We always skate to where the puck might be—in this case a full-blown pandemic.”

Navarro wrote that he believed that the U.S. “CAN develop a vaccine and treatment therapeutics in half the usual time,” and said “we MUST get appropriate protective gear and point of care diagnostics.”

TRUMP SAYS 'THERE IS A LIGHT AT THE END OF THE TUNNEL,' AFTER GRIM WARNINGS OF DEATH TOLL RISING

“This is the first line of defense for our health care workers and secondary workers in facilities such as elder care and skilled nursing,” Navarro wrote. “Key items include N-95 facemasks, goggles, gloves, Tyvek suits, ventilator circuits and Positive Air Pressure Respirators (PAPRs).”

Navarro, at the time, called for more than $618 million for PPE and ventilators.

A source told Fox News on Tuesday that many felt that Navarro’s February memo came off as aggressive; however, the source also said that there were some officials within the National Security Council and the White House who tracked along the same lines as Navarro.

Last week, during a White House Coronavirus Task Force briefing, the president warned that “a very painful two weeks” were ahead.

Yet a day after Navarro's second memo, Trump tweeted: "The Coronavirus is very much under control in the USA."

Navarro’s projections of a lack of PPE and ventilators served as a preview of what was to come as hospitals across the nation, specifically in New York, have urged the administration to help provide more necessary equipment and supplies for those on the frontlines.

The inspector general for the Department of Health and Human Services released a report on Monday, which revealed severe shortages of testing supplies and extended waits for results at hospitals across the nation; widespread shortages of PPE which put staff and patients at risk; difficulty maintaining adequate staffing; and shortages of critical supplies, like hand sanitizer, facemasks, toilet paper, linen, disinfectant cleaning supplies and more, as well as materials and logistics support.

U.S. Surgeon General Vice Adm. Jerome Adams issued a dire warning that the coronavirus outbreak has yet to hit its expected peak.

“It’s tragically fitting that we’re talking at the beginning of Holy Week because this is going to be the hardest and saddest week of most Americans’ lives, quite frankly,” Adams said on “Fox News Sunday,” comparing it to historic national tragedies.

“This is going to be our Pearl Harbor moment, our 9/11 moment, only it’s not going to be localized,” he continued. “It’s going to be happening all over the country. And I want America to understand that.”